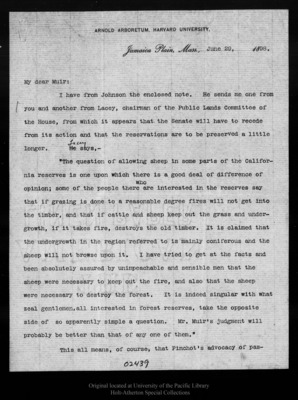 ARNOLD ARBORETUM, HARVARD UNIVERSITY,Jamaica Plain, Mass, June 29, 1898.My dear Muir:I have from Johnson the enclosed note. He sends me one from you and another from Lacey, chairman of the Public Lands Committee of the House, from which it appears that the Senate will have to recede from its action and that the reservations are to be preserved a little longer. Lacey says,-"The question of allowing sheep in some parts of the California reserves is one upon which there is a good deal of difference of whoopinion; some of the people there are interested in the reserves say that if grazing is done to a reasonable degree fires will not get into the timber, and that if cattle and sheep keep out the grass and undergrowth, if it takes fire, destroys the old timber. It is claimed that the undergrowth in the region referred to is mainly coniferous and the sheep will not browse upon it. I have tried to get at the facts and been absolutely assured by unimpeachable and sensible men that the sheep were necessary to keep out the fire, and also that the sheep were necessary to destroy the forest. It is indeed singular with what zeal gentlemen, all interested in forest reserves, take the opposite side of so apparently simple a question. Mr. Muir's judgment will probably be better than that of any one of them."This all means, of course, that Pinchot's advocacy of pas-02439