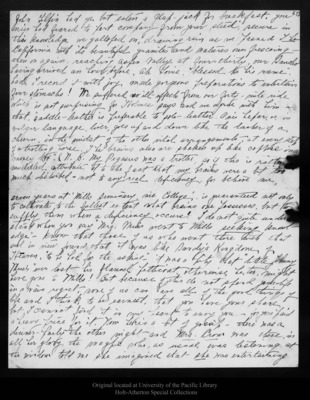 [3]John Gilfin had ye but eaten flap-jack for breakfast, you nier had feared to part company from your steed,"secure in this knowledge we galloped on, drawing rein as we passed The California with its beautiful granites and natures own frescoing then on again reaching Aspen Valley at four-thirty, our Sancho having arrived an hour before, Ah Louis, "blessed be his name," had, I record it with joy, made gorgeous preparations to entertain four stomachs! We suffered no ill-effects from our forty-mile ride which is not surprising for Holmes says and we agree with him that "saddle-leather is preferable to sole-leather. One's hepar, or, in vulgar language, liver, goes up and down like the dasher of a churn, in the midst of the other vital arrangements, at every step of a trotting horse. The brains also are shaken up like coppers in a money box." (N. B. My Pegasus was a trotter, so if this is rather muddled, attribute it to the fact that my brains were a bit much disturbed--not to any real deficiency for believe me, seven years at Mills seminary, [nie?] College, is guaranteed not only to cultivate to the fullest extent what brains one possesses, but to supply them when a deficiency occurs! I do not quite understand when you say "Mrs. Muir went to Mills seeking knowledge" know that those of us who went there with that end in view found that it was like [illegible]dy's Kingdom of Heaven, "to be had for the asking" it was a pity that "little Johnny Muir" ever lost his flannel petticoat, otherwise he too might have gone to Mills! But because of this do not spend your life in a vain regret, none of us can have all of the good things of life and I think, to be earnest, that you have your share, but I cannot find it in my heart to envy you, for you paid a heavy price for it. Now here's a bit of gossip. There was a dinner party the other night and Mrs. Crow was there, in all her glory, the magpie who, as usual, was listening at the window told me she imagined that she was entertaining