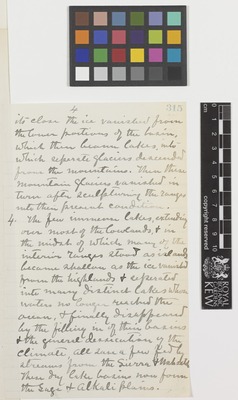 its close, the ice vanished from the lower portions of the basin, which then became lakes, into which separate glaciers descended from the mountains. Then these mountain glaciers vanished in turn after sculpturing the ranges into their present condition. 4. The few immense lakes, extending over most of the lowlands, and in the midst of which many of the interior ranges stood as islands, became shallow as the ice vanished from the highlands and separated into many distinct lakes whose waters no longer reached the ocean, and finally disappeared by the filling in of their basins and the general desiccation of the climate, all save a few fed by streams from the Sierra and [Wasatch]. These dry lake basins now form the Sage and Alkali plains.

Documents reproduced with the kind permission of the Board of Trustees of the Royal Botanic Gardens, Kew.