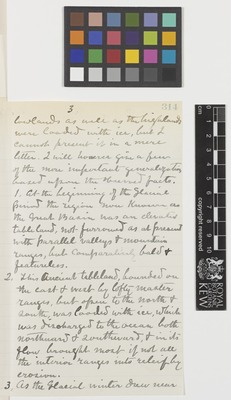 lowlands as well as the highlands were covered with ice, but I cannot present it in a mere letter. I will however, give a few of the more important generalizations, based upon the observed facts. 1. At the beginning of the glacial period, the region now known as the Great Basin, was an elevated tableland, not furrowed as at present with parallel valleys and mountain ranges, but comparatively bald and featureless. 2. This ancient tableland, bounded on the east and west by lofty mountain ranges, but open to the north and south, was loaded with ice, which was discharged to the ocean both northward and southward, and in its flow brought most if not all of the interior ranges into relief by erosion. 3. As the Glacial winter drew near

Documents reproduced with the kind permission of the Board of Trustees of the Royal Botanic Gardens, Kew.