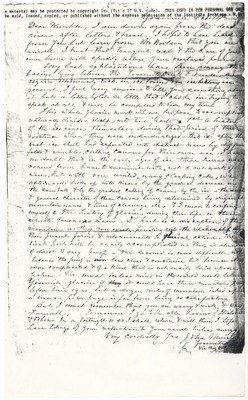 Yosemite Oct 14th Dear Runkle, I am down again from the dead rivers after letters and bread. I hoped to have heard from you but learn from Mr. Woolson that you are unwell. I trust that tranquil rest and the care of your own home will speedily restore your overtaxed powers. My last explorations have been among the basins lying between the Yosemite Creek and Nevada a region immensely rich in ice forms and in ice history in general. I feel very anxious to tell you something about it but a letter holds so little that I choke in trying to speak at all and will be compelled to bide my time. This whole glacier work wh we propose to accomplish naturally divides itself into two parts. 1st a history of the ice rivers themselves during that period of their existence when they were individualized – that is after the vast ice sheets had separated into distinct rivers by difficult folds and wrinkles, cutting canons for their own use. I have no doubt that in the early ages of ice these Sierras were covered from base to summit with, not a network of rivers, but with one united, wavy, clasping cake wh the snowfall and by the gradual cutting of canons by the ice – the direct and general character of those canons being determined by original mountain waves and lines of cleavage etc. And I mean to confine myself to the history of glaciers during their life in those separate canons as rivers. 2nd past is a description of the mountains as they now exist pointing out the relationship of their present forms and adornments to glacial action. The first part will be easily accomplished as there is abundance of direct and easy proof. The second is more difficult not because the proof is less clear and conclusive but because it is more complicated and of a kind that is not easily laid upon paper. The most iceless mind in the world would believe Yosemite glaciers if it could have these mountain proofs before their eyes, but a dozen miles of mountain inked upon a six inch paper page is far from being as satisfactory. But I must remember that you are weary and sick and say farewell. Tomorrow I go to the upper basins of Illouette and Pohons. In a fortnight or so I shall return and will then I hope have tidings of your restoration to your usual tireless energy. Very cordially yrs John Muir Yosemite via Big Oak

John Daniel Runkle Papers, MC 7, Institute Archives and Special Collections, MIT Libraries. Please contact this institution directly to obtain copies of the images or permission to publish or use them beyond educational purposes.