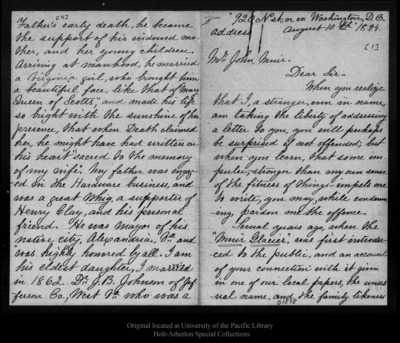 [4]Father's early death, he became the support of his widowed mother, and her young children. Arriving at manhood, he married a Virginia girl, who brought him a beautiful face, like that of "Mary Queen of Scotts," and made his life so bright with the sunshine of her presence, that when Death claimed her, he might have had written on his heart "sacred to the memory of my wife." My father was engaged in the Hardware business, and was a great Whig, a supporter of Henry Clay, and his personal friend. He was mayor of his native city, Alexandria, Va. and was highly honored by all. I am his eldest daughter, I married in 1862. Dr. J. B. Johnson of Jefferson Co., who was a920 N st., n.w. Washington, D. C.address August 10th 1894.Mr John Muir,Dear Sir,When you realize that I, a stranger, even in name, am taking the liberty of addressing a letter to you, you will perhaps be surprised if not offended; but when you learn, that some impulse, stronger than my own sense of the fitness of things--impels one to write, you may, while condemning, pardon one the offence.Several years ago, when the "Muir Glacier," was first introduced to the public, and an account of your connection with it given in one of our local papers, the unusual name, and the family likeness01838