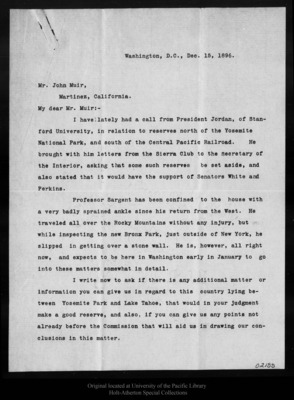 Washington, D.C., Dec. 15, 1896.Mr. John Muir,Martinez, California. My dear Mr. Muir:-I have lately had a call from President Jordan, of Stanford University, in relation to reserves north of the Yosemite National Park, and south of the Central Pacific Railroad. He brought with him letters from the Sierra Club to the Secretary of the Interior, asking that some such reserves be set aside, and also stated that it would have the support of Senators White and Perkins.Professor Sargent has been confined to the house with a very badly sprained ankle since his return from the West. He traveled all over the Rocky Mountains without any injury, but while inspecting the new Bronx Park, just outside of New York, he slipped in getting over a stone wall. He is, however, all right now, and expects to be here in Washington early in January to go into these matters somewhat in detail.I write now to ask if there is any additional matter or information you can give us in regard to this country lying between Yosemite Park and Lake Tahoe, that would in your judgment make a good reserve, and also, if you can give us any points not already before the Commission that will aid us in drawing our conclusions in this matter.02188