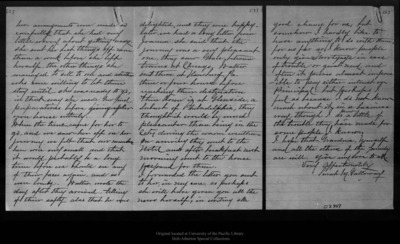 [2]her arrangements were made so carefully that she had very little worry about getting ready. she sent her best things off more than a week before she left herself, the other things she managed to sell to one and another who were willing to let them stay until she was ready to go, in that way she made her final preparations before giving up her own house entirely.When the time came for her to go, and we saw her off on her journey, we felt that our number here were very small and that it would probably be a long time before we should see any of their faces again, and so were lonely. Walter wrote the day after they arrived, telling of their safety also that he was [3]delighted, and they were happy. later, we had a long letter from Joanna, she said that the journey was a very pleasant one, they saw Grace between trains at Chicago, Walter met them at Harisburg, Pa. three or four hours before reaching their destination. Their home is at Glenside, a suburb of Philadelphia, they thought it would be much pleasanter than being in the city during the warm weather. On arriving they went to the Hotel and after breakfast next morning went to the house prepared for them.I forwarded the letter you sent to her, in my care, so perhaps she will have given you all the news herself, in writing she[6]good chance for us, but somehow I hardly like to have anything to do with them, for so far as I know people only given a mortgage in case of trouble or great need, and often at prices almost mpossible to pay either interest or principal, but perhaps I feel so because I do not know much about it in a business way, though I do know a little of the trouble they have made for some people I know.I hope that Grandma, yourself and all the others of the family are will. Give my love to all.Very AffectionatelySarah M. Galloway02307