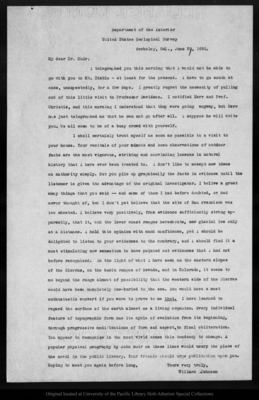 Department of the InteriorUnited States Geological SurveyBerkeley, Cal., June 20, 1892. My dear Mr. Muir: I telegraphed you this morning that 1 would not be able to go with you to Mt. Diablo - at least for the present. I have to go south at once, unexpectedly, for a few days. I greatly regret the necessity of pulling out of this little visit to Professor Davidson. I notified Kerr and Prof. Christie, and this morning I understood that they were going anyway, but Kerr has just telegraphed me that he can not go after all. I suppose he will write you. We all seem to be of a busy crowd with yourself. I shall certainly treat myself as soon as possible to a visit to your house. Your recitals of your minute and keen observations of outdoor facts are the most vigorous, striking and convincing lessons in natural history that I have ever been treated to. I don't like to accept new ideas on authority simply. But you pile up graphically the facts in evidence until the listener is given the advantage of the original investigator. I belive a great many things that you said - and some of them I had before doubted, or had never thought of, but I don't yet believe that the site of San Francisco was ice sheeted. I believe very positively, from evidence sufficiently strong apparently, that it, and the lower coast ranges hereabouts, saw glacial ice only at a distance, I hold this opinion with much confidence, yet I should be delighted to listen to your evidences to the contrary, and I should find it a most stimulating new sensation to have pointed out evidences that I had not before recognized. In the light of what I have seen on the eastern slopes of the Sierras, on the basin ranges of Nevada, and in Colorado, it seems to me beyond the range almost of possibility that the western side of the Sierras could have been completely ice-buried to the sea. You would have a most enthusiastic convert if you were to prove to me that. I have learned to regard the surface of the earth almost as a living organism. Every individual feature of topographic form has its cycle of evolution from its beginning, through progressive modifications of form and aspect, to final obliteration. You appear to recognize in the most vivid sense this tendency to change. A popular physical geography by John Muir on these lines would usurp the place of the novel in the public library. Your friends should urge publication upon you.Hoping to meet you again before long, Yours very truly, Willard Johnson