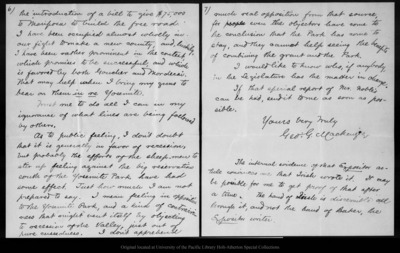 6/the introduction of a bill to give $75,000 to Mariposa to build the free road. I have been occupied almost wholly in our fight to make a new county, and, luckily, I have been rather prominent in the contest, which promises to be successful, and which is favored by both Goucher and Mordecai. That may help when I bring my guns to bear on them in [re?] Yosemite. Trust me to do all I can in my ignorance of what lines are being followed by others. As to public feeling, I don’t doubt that it is generally in favor of recession, but probably the efforts of the sheep-men to stir up feeling against the big reservation south of the Yosemite park have had some effect. Just how much I am not prepared to say. I mean feeling in opposition to the Yosemite park, and a kind of contra[illegible]ness that might vent itself by objecting to recession of the Valley, just out of pure cussedness. I don’t apprehend7/much real opposition from that source, for even the objectors have come to the conclusion that the Park has come to stay, and they cannot help seeing the benefits of combining the grant and the Park. I would like to know who, if anybody, in the Legislature has the matter in charge. If that special report of Mr. Noble’s can be had, send it to me as soon as possible.Yours Very TrulyGeo. G. Mackenzie.The internal evidence of that Expositor article convinces me that Irish wrote it. It may be possible for me to get proof of that after a time. The hand of Irish is discernible all through it, and not the hand of Baker, the Expositor writer.