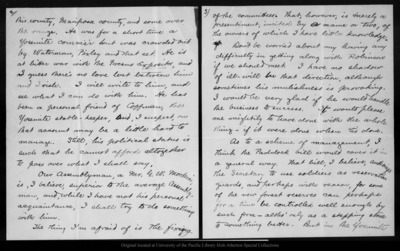 2/this county, Mariposa county, and some over the range. He was for a short time a Yosemite Comm’sr’ but was crowded out by Waterman, Pixley and that set. He is at bitter war with the Fresno Expositor, and I guess there’s no love lost between him and Irish. I will write to him, and see what I can do with him. He has been a personal friend of Coffman, the Yosemite stable-keeper, and, I suspect, on that account may be a little hard to manage. Still, his political status is such that he cannot afford altogether to pass over what I shall say. Our Assemblyman, a Mr. G. W. Mordecai is, I believe, superior to the average Assemblyman, and, while I have not his personal acquaintance, I shall try to do something with him. The thin I’m afraid of is ‘the fixing3/of the committees, that, however, is merely a presentiment, incited by a name or two, of the owners of which I have little knowledge. Don’t be worried about my having any difficulty in getting along with Robinson if we should meet. I have no shadow of ill-will in that direction, although sometimes his mulishness is provoking. I would be very glad if he would handle the business to success. It would please me mightily to have done with the whole thing – if it were done when ‘tis done. As to a scheme of management, I think the Paddock bill would cover it in a general way. That bill, I believe, authorizes the Secretary to use soldiers as reservation guards, and perhaps with reason, for some of the new forest reserves can perhaps for a time be controlled well enough by such force – altho’ only as a stepping stone to something better. But in the Yosemite