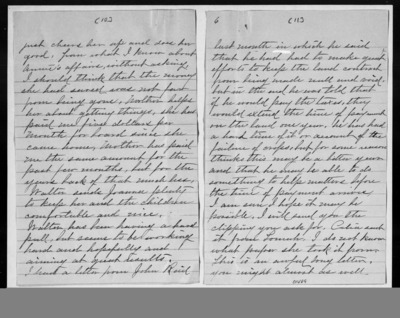 [10]just cheers her up and does her good, from what I know about Annie’s affairs, without asking, I should think that the money she had saved was not far from being gone, Mother helps her about getting things, she has paid me five dollars per month for board since she came home, Mother has paid me the same amount for the past few months, but for the years back of that much less, Walter sends Joanna plenty to keep her and the children comfortable and nice, Walter has been having a hard pull, but seems to be working hard and hopefully and aiming at great results. I had a letter from John Reid 6 [11]last month in which he said that he had had to make great efforts to keep the land contract from being made null and void, but in the end he was told that if he would pay the taxes, they would extend the time of payment on the land one year, he has had a hard time of it on account of the failure of crops, but for some reason thinks this may be a better year and that he may be able to do something to help matters before the time of payment arrives, I am sure I hope it may be possible, I will send you the clipping you ask for, Celia sent it from Lomah. I do not know what paper she took it from. This is an awful long letter, you might almost as well01489