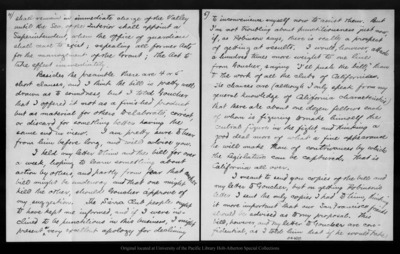 4/shall remain in immediate charge of the Valley until the Sec. of the Interior shall appoint a Superintendent, when the office of guardian shall cease to exist; repealing all former Acts for the management of the grant; the Act to take effect immediately. Besides the preamble there are 4 or 5 short clauses, and I think the bill is pretty well drawn as to soundness, but I told Goucher that I offered it not as a finished product, but as material for others to elaborate, correct, or discard for something better having the same seed in view. I am pretty sure to hear from him before long, and will advise you. I held my letter to him and the bill for over a week, hoping to learn something about action by others, and partly from fear that another bill might be underway and that one might kill the other, should Goucher approve of my suggestion. The Sierra Club people ought to have kept me informed, and if I were inclined to be punctilious in this business, I might present a very excellent apology for declining5/to inconvenience myself now to assist them. But I’m not troubling about punctiliousness just now, if, as Robinson says, there is really a prospect of getting at results. I would, however, attach a hundred times more weight to one line from Goucher, saying “I’ll push the bill,” than to the work of all the clubs of California. The chances are (although I only speak from my general knowledge of California characteristics) that there are about one dozen fellows each of whom is figuring to make himself the central figure in the fight, and thinking a good deal more of what a fine appearance he will make than of contrivances by which the Legislature can be captured, that is California all over. I meant to send you copies of the bill and my letter to Goucher, but on getting Robinson’s letter I sent the only copies I had to him, thinking it more important that our San Francisco friends should be advised as to my proposal. This bill, however, and my letter to Goucher are confidential, as I told him that if he would take06430