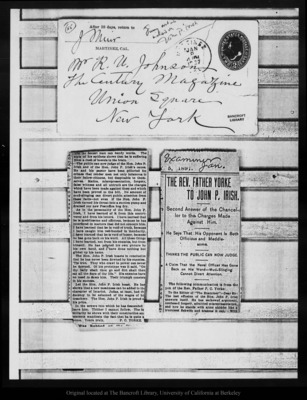 55Funny article inclosed on John P. IrishJ MuirMr. R.U. JohnsonThe Century MagazineUnion SquareNew York[newspaper clipping]Examiner Jan. 5, 1897THE REV. FATHER YORKE TO JOHN P. IRISH.Second Answer of the Chancellor to the Charges Made Against Him.He Says That His Opponent Is Both Officious and Meddlesome.THINKS THE PUBLIC CAN NOW JUDGE.A claim That the Naval Officer Has Gone Back on His Word - Mud-Slinging Cannot Divert Attention.The following communication is from the pen of the Rev. Father P.C. Yorke:To the Editor of "The Examiner" - Dear Sir:The last effusion of the Hon. John P. Irish answers itself. He has eschewed argument, confessed forgery, admitted misrepresentation, and now he stands with arms akimbo like a truculent fishwife and brazens it out. With him no decent man can bandy words. The style of his epithets shows that he is suffering from a rush of bowels to the brain.The public can now judge of the Hon. John P. Irish and of the Hon. John P. Irish's cause. He and his pastor have been pilloried for their fellow-cititzens, but despicable to themselves. Malice, misrepresentation, forgery, false witness and all untruth are the charges which have been made against them and which have been proved to the hilt. No amount of mud-slinging can divert public attention from these facts - not even if the Hon. John P. Irish turned his throat into a suction pump and drained our new Postoffice bog dry.As to the personality of the Hon. John P. Irish, I have learned of it from this controversy and from his letters. I have learned that he is meddlesome and officious, because he has interfered in matters that did not concern him. I have learned that he is void of truth, because I have caught him red-handed in mendacity. I have learned that he is void of honor, because he has gone back on his word. All these things I have learned, not from his enemies, but from himself. He has painted his own picture by his own hand, and I have done nothing but gibbet up his name.The Hon. John P. Irish boasts in conclusion that he has never been downed by his enemies. 'Tis true. They who crawl to power can never be downed. Of his prototype was it said, "On thy belly shalt thou go and dirt shalt thou eat all the days of thy life." His enemies have no need to down him. Their triumph consists in his success.In the sewers into which he has descended leave him. Thither I cannot follow. The familiarity he shows with their construction and contents manifests the fact that he is quite a [nome?]. Yours truly,P.C.YORKE