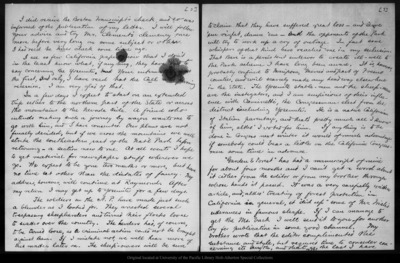 [2]I did receive the Boston Manscript check and so was informed of the publication of my letter. I will follow your advice and try Mr. Clement’s clemency once more before very long on some subject or other. I had rec’d the Times check some time ago. I see so few California papers now that I don’t in the least know what, if any thing, they have had to say concerning the Yosemite. Your [illegible] [illegible] the first, and only, I have rec’d that the Call [are favoring?] recession. I am very glad of that. In a few days I expect to start on an extended trip either to the northern part of the State or across the mountains to the Nevada side. A friend who intends making such a journey by wagon wants me to go with him, and I have consented. Our plans are not finally decided, but if we cross the mountains we will strike the southeastern part of the Nat’l Park before returning – a section new to me. At all events I hope to get material for newspaper stuff wherever we go. We expect to be gone two months or more, but have no time set other than the dictates of fancy. My address, however, will continue at Raymond. After my return I may get up to Yosemite for a few days. The soldiers in the N. P. have made just such a blunder as I looked for. They arrested several trespassing sheepherders and turned their flocks loose to scatter over the country. The herders had, of course, to be turned loose, as a criminal action could not be brought against them. If I mistake not, we will hear more of this matter later on. The sheep-owners will be sure[3]to claim that they have suffered great loss – and serve ‘em right, damn [‘cue?] — and the opponents of the Park will try to work up a cry of outrage. In fact some whispers of that kind have reached me in my seclusion. That there is a persis sent endeavor to create ill-will to the Park scheme I have long been aware. it is, however, probably confined to Mariposa, Merced and part of Fresno counties, and will scarcely make any headway elsewhere in the State. The Yosemite stable-men and the sheep-men are the instigators, and I am suspicious of their influence with Caminette, the Congressman-elect from the district including Yosemite. He is a native Californian of Italian parentage, and that’s pretty much all I know of him, altho’ I voted for him. If any thing is to be done in Congress next winter it would of much advantage if somebody could bear a little on the California Congress-men some time in advance. “Garden & Forest” has had a manuscript of mine for about four months and I can’t get a word about it either from the editor or from my brother through whose hands it passed. It was a very carefully written article, and, altho’ treating of forest protection in California in general, it “did up” some of Mr. Iris’s utterances in famous shape. If I can manage to get the Ms. back I will send it to you for another try for publication in some good channel. My brother wrote that the editor complimented the substance and style, but required time to consider concerning its length, and that is the last I have06363