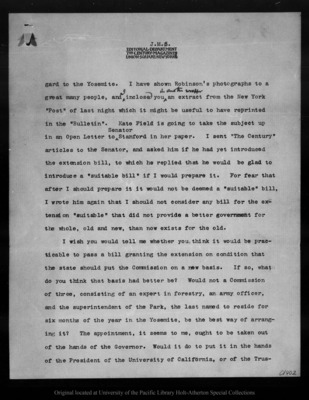 J.M.3.gard to the Yosemite. I have shown Robinson's photographs to a great many people, and I inclosed you in another wrapper [illegible]an extract from the New York"Post"of last night which it might be useful to have reprinted in the "Bulletin". Kate Field is going to take the subject up in an Open Letter to Senator Stanford in her paper. I sent "The Century" articles to the Senator, and asked him if he had yet introduced the extension bill, to which he replied that he would be glad to introduce a "suitable bill" if I would prepare it. For fear that after I should prepare it it would not be deemed a "suitable" bill, I wrote him again that I should not consider any bill for the extension "suitable" that did not provide a better government for the whole, old and new, than now exists for the old.I wish you would tell me whether you, think it would be practicable to pass a bill granting the extension on condition that the state should put the Commission on a new basis. If so, what do you think that basis had better be? Would not a Commission of three, consisting of an expert in forestry, an army officer, and the superintendent of the Park, the last named to reside for six months of the year in the Yosemite, be the best way of arranging it? The appointment, it seems to me, ought to be taken out of the hands of the Governor. Would it do to put it in the hands of the President of the University of California, or of the Trus-0/402