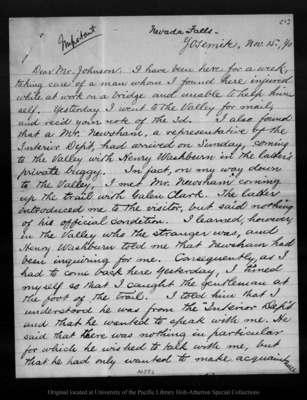 [1]ImportantNevada Falls,Yosemite, Nov. 15., '90Dear Mr. Johnson: I have been here for a week, taking care of a man whom I found here injured while at work on a bridge and unable to help himself. Yesterday I went to the Valley for mail, and rec'd your note of the 3d. I also found that a Mr. Newsham, a representative of the Interior Dep't, had arrived on Sunday, coming to the Valley with Henry Washburn in the latter's private buggy. In fact, on my way down to the Valley, I met Mr. Newsham coming up the trail with Galen Clark. The latter introduced me to the visitor, but said nothing of his official condition. I learned, however, in the Valley who the stranger was, and Henry Washburn told me that Newsham had been inquiring for me. Consequently, as I had to come back here yesterday, I timed myself so that I caught the gentleman at the foot of the trail. I told him that I understood he was from the Interior Dep't and that he wanted to speak with me. He said that there was nothing in particular for which he wished to talk with me, but that he had only wanted to make acquaintance06352