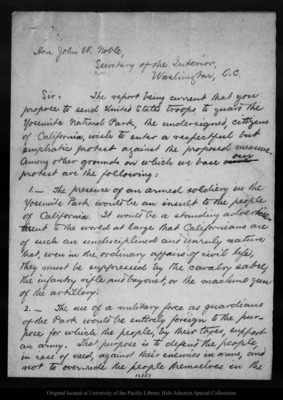 Hon. John W. Noble,Secretary of the Interior,Washington, D.C.Sir:The report being current that you propose to send United States troops to guard the Yosemite National Park, the undersigned, citizens of California, wish to enter a respectful but emphatic protest against the proposed measure. Among other grounds on which we base our protest are the following:1. The presence of an armed soldiery in the Yosemite Park would be an insult to the people of California. It would be a standing advertisement to the world at large that Californians are of such an undisciplined and unruly nature that, even in the ordinary affairs of civil life, they must be suppressed by the cavalry sabre, the infantry rifle, and bayonet, or the machine gun of the artillery. 2. The use of a military force as guardians of the Park would be entirely foreign to the purpose for which the people, by their taxes, support an army. That purpose is to defend the people, in case of need, against their enemies in arms, and not to override the people themselves in the 06357