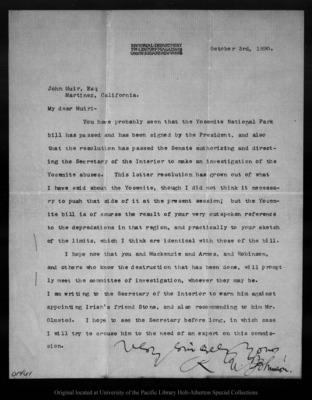 October 3rd, 1890.John Muir, EsqMartinez, California.My dear Muir:-You have probably seen that the Yosemite National Park bill has passed and has been signed by the President, and also that the resolution has passed the Senate authorizing and directing the Secretary of the Interior to make an investigation of the Yosemite abuses. This latter resolution has grown out of what I have said about the Yosemite, though I did not think it necessary to push that side of it at the present session; but the Yosemite bill is of course the result of your very outspoken reference to the depredations in that region, and practically to your sketch of the limits, which I think are identical with those of the bill.I hope now that you and Mackenzie and Armes, and Robinson, and others who know the destruction that has been done, will promptly meet the committee of investigation, whoever they may be. I am writing to the Secretary of the Interior to warn him against appointing Irish's friend Stone, and also recommending to him Mr. Olmsted. I hope to see the Secretary before long, in which case I will try to arouse him to the need of an expert on this commission.Very Sincerely YoursR. U. Johnson.01461