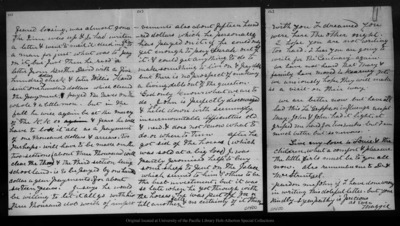 [2]feared loosing, was almost gone. the time was up and J. had writen a letter & went to mail it, deeding it to a man for just what was to pay on it but just then he recd a letter from Brother David with a five hundred dollar check & later Willis Hand sent one hundred dollars which cleared the payment, & payed the taxes on the whole & a little more, but in the fall he will again be at the mercy of the R.R. co & fears he will have to tose it all as a payment of one thousand dollars & arrears, too perhaps, will have to be made on the two sections (about three thousand will clear the [illegible]) & the third section being school land, is to be payed by one hundred dollars a year payments for about sixteen years. J. says he would be willing to let it all go with his three thousand dol. worth of impro-[3]-vements also about fifteen hundred dollars which he personally has payed on it, if he could only get enough to pay Sarah out of it, & could get anything to do to make something to live on & pay debts but there is no prospect of making a living, debts out of the question. God only knows what we are to do. John is perfectly discouraged & held down with seemingly incumountable difficulties old & new & does not know what to do or where to turn. after he got rid of the horses (which was sold at a big loss) J. was partly promised help to buy some sheep to put on the place which seemed to him & others to be the best investment, but it was so late when he got through with the horses, he was put off for it till another fall & no certainty of it then.01400[6]with you I dreamed you were here the other night. I hope you are not writing too hard. I hear you are going to write for The Century again. We have not heard that Mary & family have moved to Kearney yet. we anxiously hope they will make us a visit on their way. we are better now but have all had this La Grippe or influenza except May. John & John had it light. it griped my hard for two weeks but I am much better but so nervous. Give my move to Louie & the children, what a comfort & pleasure the little girls must be to you all now, also remember me to Dr. & Mrs Strentzel. pardon me John if I have done wrong in writing this doleful letter, but your kindly sympathy is preciousAs EverMaggie01400