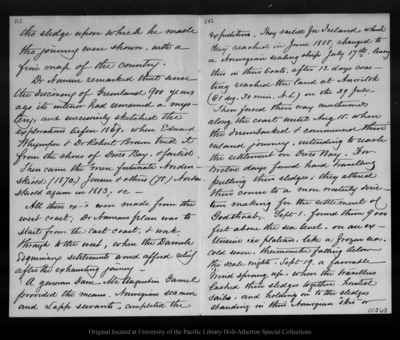 [2]the sledge upon which he made the journey were shown, with a fine map of the country. Dr Nansen remarked that since the discovery of Greenland 900 years ago its interior had remained a mystery, and successively sketched the explorations [Aefen?] 1869, when Edward Whymper & Dr Robert Brown tried it from the shores of Disco Bay, & failed. Then came the more fortunate Nordenskiold (1870) Jensen & others (78) Nordenskiold again in 1883; etc - All these [illegible] were made from the west coast; Dr Nansens plan was to start from the east coast, & work through to the west, where the Danish [illegible] settlements would afford relief after the exhausting journey - A generous Dane Mr Augustin Gamel provided the means. Norwegian seamen and Lapp servants completed the [3]expedition. They sailed for Iceland which they reached in June 1888; changed to a Norwegian sealing ship July 17th, leaving this in their boats after 12 days coasting reached the land at Amerilak (61 deg. 30 min. N.L) on the 29 July. Then forced their way northwards along the coast until Aug 15. when the disembarked & commenced their inland journey, intending to reach the settlement on Disco Bay. For twelve days found hard travelling pulling their sledges; they altered their course to a more westerly direction making for the settlement of Godthaab. Sept 1. found them 9000 feet above the sea level, on an extensive ice plateau, like a frozen sea, cold severe, thermometer falling below the scale nights. Sept 19, a favorable wind sprang up, when the travellers lashed their sledges together, hoisted sails and holding on to the sledges standing in their Norwegian "skis" or01368