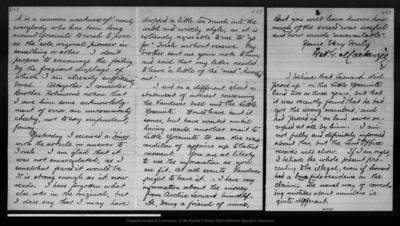 [2]it is a common weakness of nearly everybody who has been long around Yosemite to wish to pose as the sole, original pioneer in something or other. I don't propose to encourage the failing, by the frequent displays of which I am already sufficiently bored. Altogether I consider Brother Robinson's notion that I owe him some acknowledgement of error an uncommonly cheeky, not to say impudent, fancy. Yesterday I received a Times with the article in answer to Irish. I am glad that it was not emasculated, as I somewhat feared it would be. It is strong enough as it now reads. I have forgotten what else was in the original, but I dare say that I may have [3]dropped a little too much into the wild and wooly style, as it is extremely agreeable to me to "go for" Irish without reserve. My brother sent me your note to him, and said that my letter needed to have "a little of the 'mad' knocked out." I send on a different sheet a statement of interest concerning the Vandever bill and the Little Yosemite. Would have sent it sooner, but have waited until having made another visit to Little Yosemite to see the exact condition of affairs up to latest moment. You are at liberty to use the information as you see fit. At all events Vandever ought to have it. I have my information about the money from Archie Leonard himself. He, being a friend of mine, [6]But you will have known how much the screed was useful and how much "unavailable."Yours Very Truly,Geo. G. MackenzieI believe that Leonard did "prove up" on the Little Yosemite land two or three years, but that it was recently found that he had got the wrong numbers, and had "proved up" on land never occupied at all by him. I am not fully and defintely informed about this, but the Land Office records will show. If I am right, I believe the whole present proceeding to be illegal, even if Leonard had a bona fide residence on the claim. The usual way of correcting mistakes about numbers is quite different.06403