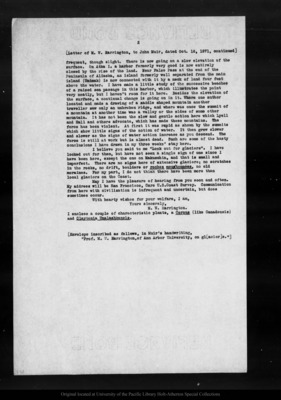 2[Letter of M. W. Harrington, to John Muir, dated Oct. 16, 1871, continued]frequent, though slight. There is now going on a slow elevation of the surface. On Atka I. a harbor formerly very good is now entirely closed by the rise of the land. Near False Pass at the end of the Peninsula of Allaska, an island formerly well separated from the main island (Unimak) is now connected with it by a neck of land four feet above the water. I have made a little study of the successive beaches of a raised sea passage in this harbor, which illustrates the point very neatly, but I haven't room for it here. Besides the elevation of the surface, a continual change is going on in it. Where one author located and made a drawing of a saddle shaped mountain another traveller saw only an unbroken ridge, and where was once the summit of a mountain at another time was a valley or the sides of some other mountain. It has not been the slow and gentle action here which Lyell and Hall and others advocate, which has made these mountains. The force has been violent. At first it was rapid as shown by the summits which show little signs of the action of water. It then grew slower and slower as the signs of water action increase as you descend. The force is still at work but is almost dead. Such are some of the hasty conclusions I have drawn in my three weeks' stay here.I believe you said to me "Look out for glaciers". I have looked out for them, but have not seen a single sign of one since I have been here, except the one on Makuschin, and that is small and imperfect. There are no signs here of extensive glaciers; no scratches in the rocks, no drift, boulders or roches moutonnées, no old moraines. For my part, I do not think there have been more than local glaciers on the Coast.May I have the pleasure of hearing from you soon and often. My address will be San Francisco, Care U.S.Coast Survey. Communication from here with civilization is infrequent and uncertain, but does sometimes occur.With hearty wishes for your welfare, I am, Tours sincerely,M. W. Harrington.I enclose a couple of characteristic plants, a Cornus (like Canadensis) and Claytonia Unalashkensis.[Envelope inscribed as follows, in Muir's handwriting,"Prof. M. W. Harrington,of Ann Arbor University, on gl[acier]s."]291