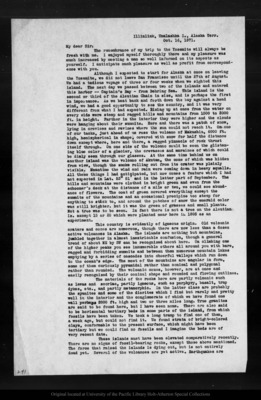 Illinlink, Unalashka I., Alaska Terr.Oct. 16, 1871.My dear Sir:The remembrance of my trip to the Yosemite will always be fresh with me. I enjoyed myself thoroughly there and my pleasure was much increased by meeting a man so well informed on its aspects as yourself. I anticipate much pleasure as well as profit from correspondence with you.Although I expected to start for Alaska at once on leaving the Yosemite, we did not leave San Francisco until the 27th of August. We had a tedious voyage of three or four weeks when we sighted this island. The next day we passed between two of the islands and entered this harbor -- Captain's Bay - from Behring Sea. This island is the second or third of the Aleutian Chain in size, and is perhaps the first in importance. As we beat back and forth down the bay against a head wind, we had a good opportunity to see the country, and it was very different from what I had expected. Rising up at once from the water on every side were steep and ragged hills and mountains from 1500 to 3000 ft. in height. Farther in the interior they were higher and the clouds were hanging about their summits. Here and there was a patch of snow, lying in crevices and ravines where the sun could not reach it. On one of our tacks, just ahead of us rose the volcano of Makushin, 6000 ft. high, hemispherical in shape, covered with snow for half the distance down except where, here and there, a ragged pinnacle of rock thrust itself through. On one side of the volcano could be seen the glistening blue color of a glacier, the crevasses and moraines of which could be dimly seen through our glasses. At the same time behind us on another island was the volcano of Akutan, the cone of which was hidden from view, though the smoke rolling out from its crater was plainly visible. Meantime the wind and rain were coming down in heavy squalls. All these things I had anticipated, but now comes a feature which I had not expected in Lat. 53° 51 and in the latter part of September. The hills and mountains were clothed in bright green and even from the schooner's deck at the distance of a mile or two, we could see abundance of flowers. The coat of green covered everything except the summits of the mountains and an occasional precipice too steep for anything to stick to, and around the patches of snow the emerald color was still brighter, but it was the green of grasses and small plants. Not a tree was to be seen. In fact there is not a tree on the Aleutian. Is. except 15 or 20 which were planted near here in 1805 as an experiment.This country is evidently of igneous origin. Old volcanic craters and cones are numerous, though there are now less than a dozen active volcanoes in Alaska. The islands are nothing but mountains, jumbled together in almost inextricable confusion, though a general trend of about NE by SW can be recognized about here. On climbing one of the higher peaks you see innumerable others all around you with bare, ragged and forbidding summits and between them numerous mountain lakes emptying by a series of cascades into cheerful valleys which run down to the ocean's edge. The most of the mountains are angular in form, some of them curiously pyramidal rather than conical and polygonal rather than rounded. The volcanic cones, however, are at once and easily recognized by their conical shape and rounded and flowing outlines.The materials of the rocks here are partly volcanic such as lavas and scoriae, partly igneous, such as porphyry, basalt, trap dykes, etc., and partly metamorphic. In the latter class are probably the syenites and some of the diorites which I find but rarely and pretty well in the interior and the conglomerate of which we have found one wall perhaps 2000 ft. high and two or three miles long. True granites are said to be found here, but I have seen none. There are also said to be horizontal tertiary beds in some parts of the island, from which fossils have been taken. We took a long tramp to find one of them, a week ago, but could not find it. We found strata of bright-colored clays, conformable to the present surface, which might have been tertiary but we could find no fossils and I imagine the beds are of very recent date.These Islands must have been elevated comparatively recently. There are no signs of fossil-bearing rocks, except those above mentioned. The force that raised the islands is dying out, but is not entirely dead yet. Several of the volcanoes are yet active. Earthquakes are291