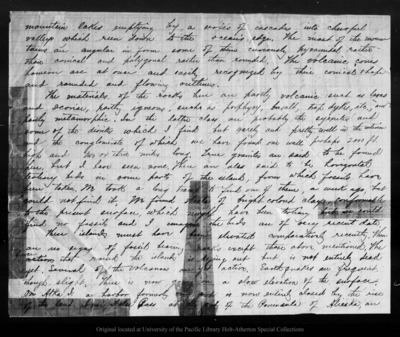 mountain lakes emptying by a series of cascades into cheerful valleys which run down to the ocean's edge. The most of the moun- tains are angular in form some of them curiously pyramidal rather than conical and polygonal rather than rounded. The volcanic cones however are at once and easily recognized by their conical shape and rounded and flowing outlines. The materials of the rocks here are partly volcanic such as lavas and scoriae, partly igneous, such as porphyry, basalt, trap dykes, etc., and partly metamorphic. In the latter class are probably the syenites and some of the diorites which I find but rarely and pretty well in the interior and the conglomerate of which we have found one wall perhaps 2000 ft. high and two or three miles long. True granites are said to be found here, but I have seen none. There are also said to be horizontal tertiary beds in some parts of the island, from which fossils have been taken. We took a long tramp to find one of them, a week ago, but could not find it. We found strata of bright colored clays, conformable to the present surface, which might have been tertiary but we could find no fossils and I imagine the beds are of very recent date. These islands must have been elevated comparatively recently. There are no signs of fossil-bearing rocks, except those above mentioned. The force that raised the islands is dying out, but is not entirely dead yet. Several of the volcanoes are yet active. Earthquakes are frequent, though slight. There is now going on a slow elevation of the surface. On Atka I. a harbor formerly very good is now entirely closed by the rise of the land. Near False Pass at the end of the Peninsula of Alaska, an