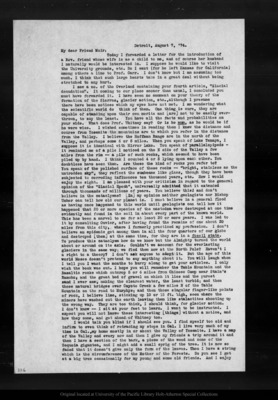 Detroit, August 7, '74.My dear Friend Muir:Today I forwarded a letter for the introduction of a Rev. friend whose wife is as a child to me, and of course her husband I naturally would be interested in. I suppose he would like to visit the University grounds, etc. So I sent (for he left Kansas for California) among others a line to Prof. Carr. I don't know but I am assuming too much. I think that such large hearts take in a great deal without being stretched to any hurt.I saw a no. of the Overland containing your fourth article, "Glacial denudation". It coming to our place sooner than usual, I concluded you must have forwarded it. I have seen no comment on your theory of the formation of the Sierras, glacier action, etc., although I presume there have been notices which my eyes have not met. I am wondering what the scientific world do think of them. One thing is sure, they are capable of standing upon their own merits and [are] not to be easily overthrown, to say the least. You have all the facts and probabilities on your side. What does Prof. Whitney say? Or is he mum, as he would be if he were wise. I wished sometimes in reading them I knew the distance and course from Yosemite the mountains are to which you refer in the distance from the Valley. I believe the Hoffman Range are in the north of the Valley, and perhaps some 6 or 8 miles. When you speak of Lake Tenaya, I suppose it is identical with Mirror Lake. You speak of parallelopipeds -it reminded me of a pile I noticed on the N side of the Valley a few miles from the rim - a pile of such rocks, which seemed to have been piled up by hand. I think I counted 4 or 5 lying upon each other. You doubtless have seen them. Are these the kind of rocks you refer to? You speak of the polished surface of these rocks - "bright, stainless as the untrodden sky", they reflect the sunbeams like glass, though they have been subjected to corroding influences ten thousand years, etc. How I would enjoy the sight. I am pleased with your criticism in regard to the general opinion of the "Glacial Epoch", universally admitted that it extended through thousands of millions of years. You believe this! and don't believe in the cataclysms? [In] my opinion neither geologists nor Bishop Usher can tell how old our planet is. I must believe in a general flood as having once happened to this world until geologists can tell how it happened that 20 or more species of the mastodon were destroyed at one time evidently and found in the soil in about every part of the known world. This has been a marvel to me for at least 30 or more years. I was led to it by consulting Ouvier, after having found the remains of one about 20 miles from this city, where I formerly practiced my profession. I don't believe an epidemic got among them in all the four quarters of our globe and destroyed [them] at the same time, for they are in a fossil state. To produce this cataclysm how do we know but the Almighty turned the world about or around on its axis. Couldn't we account for the everlasting glaciers in the same way; we find them now at the North Pole? Haven't I a right to a theory? I don't ask anyone to adopt it. But the age of this world Moses doesn't pretend to say anything about it. You will laugh when I tell you I want the months to hurry along to get your articles. I only wish the book was out. I hope you will remember the Table Mountain and the Basaltic rocks which outcrop 5 or 6 miles from Chinese Camp near Stain's Rancho; and the great bed of gravel on which it lies and the purest sand I ever saw, making the clearest water, the least turbid; and then those natural bridges over Cayoto Creek a few miles N of the Table Mountain on the road to Murphys; and then those singular finger-like points of rock, I believe lime, sticking up 10 or 15 ft. high, seen where the miners have washed out the earth leaving them like stalactites shooting up the wrong way. They are too thick, I should think, for glacier action. I don't know - I sit at your feet to learn. I want to be instructed. I expect you will not leave these interesting [things] without a notice, and how they came, and get ahead, of Whitney too.I would talk you blind if I should see you. I find myself too old and infirm to even think of retracing my steps in Cal. I live very much of my time in Cal., my home mostly in or about the Valley of Yosemite. I have a map of the Valley and every now and then I give my friends a trip around it and then I have a section of the bark, a piece of the wood and cone of the Sequoia gigantea, and I might add a small sprig of the tree. It is now so faded that it doesn't give only the form of the leaves. Then I have a string which is the circumference of the Mother of the Forests. So you see I get at a big tree occasionally for my young and some old friends. And I enjoy336