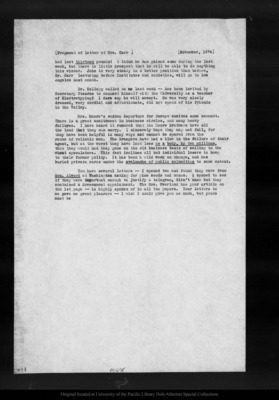 [Fragment of letter of Mrs. Carr ][November, 1874]had lost thirteen pounds! I think he has gained some during the last week, but there is little prospect that he will be able to do anything this winter. John is very steady in a better position than before, Dr. Carr lecturing before Institutes and societies, will go to Los Angeles next month.Dr. Kellogg called on me last week - has been invited by Secretary Stearns to connect himself with the University as a teacher of Electrotyping! I dare say he will accept. He was very nicely dressed, very cordial and affectionate, did not speak of his friends in the Valley.Mrs. Moore's sudden departure for Europe excites some comment. There is a great excitement in business circles, and many heavy failures. I have heard it rumored that the Moore brothers have all the load that they can carry. I sincerely hope they may not fail, for they have been helpful in many ways and cannot be spared from the ranks of reliable men. The Grangers have had a blow in the failure of their agent, but at the worst they have lost less as a body, by two millions, than they would had they gone on the old business basis of selling to the wheat speculators. This fact inclines all but individual losers to keep to their former policy. It has been a wild week on change, and has buried private, cares under the avalanche of public calamities to some extent.You have several letters - I opened two and found they were from Gen. Alvord at Washington asking for pine seeds and cones. I opened to see if they were important enough to justify a telegram, didn't know but they contained a Government appointment. The Nov. Overland has your article on the 1st page - is highly spoken of in all the papers. Your letters to me gave me great pleasure - I wish I could give you as much, but yours must be478