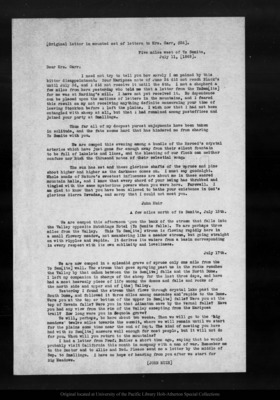 [Original letter in mounted set of letters to Mrs. Carr, #36].Five miles west of Yo Semite,July 11, [1869].Dear Mrs. Carr:I need not try to tell you how sorely I am pained by this bitter disappointment. Your Mariposa note of June 24 did not reach Black's until July 3d, and I did not receive it until the 6th. I met a shepherd a few miles from here yesterday who told me that a letter from the YoSem[ite] for me was at Harding's mill. I have not yet received it. No dependence can be placed upon the motions of letters in the mountains, and I feared this result on my not receiving anything definite concerning your time of leaving Stockton before I left the plains. I wish now that I had not been entangled with sheep at all, but that I had remained among post offices and joined your party at Snellings.Thus far all of my deepest purest enjoyments have been taken in solitude, and the fate seems hard that has hindered me from sharing Yo Semite with you.We are camped this evening among a bundle of the Merced's crystal arteries which have just one far enough away from their silent fountain to be full of lakelets and lines, and the bleating of our flock can neither confuse nor hush the thousand notes of their celestial song.The sun has set and these glorious shafts of the spruce and pine shoot higher and higher as the darkness comes on. I must say goodnight. Whole bands of Nature's sweetest influences are about me in these sacred mountain halls, and I know that every chord of your being has throbbed and tingled with the same mysterious powers when you were here. Farewell. Iam glad to know that you have been allowed to bathe your existence in God's glorious Sierra Nevadas, and sorry that I could not meet you.John MuirA few miles north of Yo Semite, July 13th.We are camped this afternoon upon the bank of the stream that falls into the Valley opposite Hutchings Hotel (Yo Semite falls). We are perhaps three miles from the Valley. This Yo Sem[ite] stream is flowing rapidly here in a small flowery meadow, not meandering like a meadow stream, but going straight on with ripples and rapids. It derives its waters from a basin corresponding in every respect with its own sublimity and loveliness.July 17th.We are now camped in a splendid grove of spruce only one mile from the Yo Sem[ite] wall. The stream that goes spraying past us in the rocks reaches the Valley by that cannon between the Yo Sem[ite] falls and the North Dome. I left my companion in charge of the sheep for the last three days, and have had a most heavenly piece of life among the domes and falls and rocks of the north side and upper end of [the] Valley.Yesterday I found the stream that flows through crystal lake past the South Dome, and followed it three miles among cascades and 'rapids to the Dome. Were you at the top or bottom of the upper Yo Sem[ite] falls? Were you at the top of Nevada falls? Were you in that Adiantum cave by the Vernal falls? Have you had any view from the rim of the Valley excepting from the Mariposa trail? How long were you in Sequoia grove?We will, perhaps, be here about two weeks. Then we will go to the "hig meadows" twelve miles towards the summit, where we will remain until we start for the plains some time near the end of Sept. The kind of meeting you have had with Yo Sem[ite] answers well enough for most people, but it will not do for you. When will you return to the mountains?I had a letter from Prof. Butler a short time ago, saying that he would probably visit California this month in company with a man of war. Remember me to the Doctor and to Allie and Ned. Please send me a letter by the middle of Sep. to Snellings. I have no hope of hearing from you after we start for Big Meadows.[JOHN MUIR]