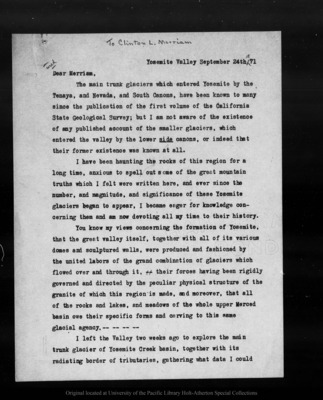 To Clinton L. MerriamYosemite Valley September 24th 1871Dear Merriam,The main trunk glaciers which entered Yosemite by the Tenaya, and Nevada, and South Canons, have been known to many since the publication of the first volume of the California State Geological Survey; but I am not aware of the existence of any published account of the smaller glaciers, which entered the valley by the lower side canons, or indeed that their former existence was known at all.I have been haunting the rocks of this region for a long time, anxious to spell out some of the great mountain truths which I felt were written here, and ever since the number, and magnitude, and significance of these Yosemite glaciers began to appear, I became eager for knowledge concerning them and am now devoting all my time to their history.You know my views concerning the formation of Yosemite, that the great valley itself, together with all of its various domes and sculptured walls, were produced and fashioned by the united labors of the grand combination of glaciers which flowed over and through it, their forces having been rigidly governed and directed by the peculiar physical structure of the granite of which this region is made, and moreover, that all of the rocks and lakes, and meadows of the whole upper Merced basin owe their specific forms and carving to this same glacial agency,-- -- -- --I left the Valley two weeks ago to explore the main trunk glacier of Yosemite Creek basin, together with its radiating border of tributaries, gathering what data I could