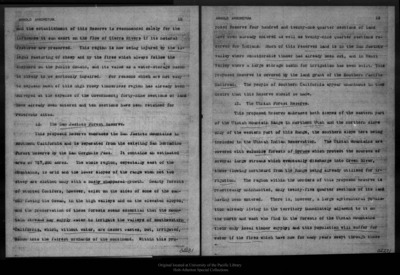 ARNOLD ARBORETUM.and the establishment of this Reserve is recommended solely for the influence it can exprt on the flow of Sierra Rivers if its naturalfeatuares are preserved. This region is now being injured by the illegal pasturing of sheep and by the fires which always follow the shepherd on the public domain, and its value as a water-storage basin is likely to be seriously impaired. For reasons which are not easy to explain much of this high rocky timberless region has already been surveyed at tae expense of the Government; forty-nine sections of land have already been entered and ten sections have been retained for reservoir sites.12. The San Jacinto Forest Reserve.This proposed Reserve enoraces the San Jacinto Mountains in southern California and is separated from the existing San BernadinoForest Reserve by the San Gorgonio Pass. It contains an estimated area of 757,280 acres. The whole region, especially east of the Mountains, is arid and the lower slops of th range when not too steep are clothed only with a bushy chapparel growth. Seanty forests of stunted conifers, however, exits on the sides of some of the canons facing the Ocean, in the high valleys and on the elevated slopes, and the preservation of these forests seems essential that the mountain streams may supply water ot irrigate the valleys of southwestern California, which, without water, are desert wastes, but irrigated, blooms into the fairest orchards of the continent, within this proposed Reserve four hundred and twenty-one quarter sections of land have been already entered as well as twenty-nine quarter sections reserved for Indians. Much of this reserved land is in San Jacinto valley where considerabletimber has already been cut, and in [Hemit] valley where a large stronge basin for irregation has been built. This proposed Reserve is covered by the land grant of the Southern Pacific [Railroad]. The people of the Southern California appear unanimous in their desire that this Reserve should be made.13. The Uintah Forest Reserve.This proposed Reserve embraces both slopes of the eastern part of the Uintah Mountain Range in northern Utah and the northern slope only of the western part of this Range, the southern slope here being included in the Uintah Indian Reservation. The Uintah Mountains are covered with valuable forests of spruce wich protect the sources of several large streams which eventually discharge into Green River, those flowing northward from the Range being already utilised for irregation. The region within the borders of this proposed Reserve is practically uninhabited, only twenty-five quarter sections of its land having been entered. There is, however, a large agricultural population already living in the territory immediately adjacent to it on the north and east who find in the forests of the Uintah Mountains, there only local timber supply; and this population will suffer for water it the fires which have now for many years swept through these