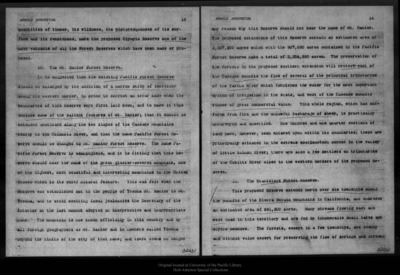 ARNOLD ARBORETUM. 14any reason way this Reserve should not bear the name of Mt. Ranier. The proposed extensions of this Reserve contain as estimated area of 1,207,200 acres which with the 967$,$ acres contained in the Pacific forest Reserve make a total of 2,234,880 acres. The preservation of tae forests in the proposed southern extension will protect east of tae Cascade summits the flow of several of the principal tributaries of the Yakima River which furnishes the water for the most important system of irrigation in tae state, and west of the Cascade summits timber of great eoi.mercial value. This whole region, which has suffered from fire and the unlawful pasturage of sheep, is practically unsurveyed and unsettled. One hundred and one quarter sections of land have, however, been entered upon within its boundaries ; these are principally situated in the extreme southeastern corner in the valley of little Salmon River; there are also a few seltlers on tributaries of the.Cowlitz River close to the western borders of the proposedReserve.The Stanislaus Forest Reserve.This proposed Reserve extends north over six townships along the sumaits of the Sierra Nevada Mountains in California, and emoraces an estimated area of 691,200 acres. Many streams flowing east and west head in this territory and are fed by innumerable small lakes and alpine meadows. The forests, except in a few townships, are scanty and without value except for preserving the flow of springs and streamsARNOLD ARBORETUM. 13quantities of timber, its wildness, the picture soreness of its Surface and its remoteness, make the proposed O1ympic Reserve one of the -most valuable of all the Forest Reserves which have bean made or proposed.10. The Mt. Ranier Forest Reserve.It is suggested that the existing Pacific Forest Reserve Should -be enlarged by the addition of a narrow strip of territory along its western $order, in order to correct an error made when the boundaries of this Reserve were first laid down, and to make it thus incluce some of the Salient features of Mt. Ranjer; that it should be extended southward along the two slopes of the Cascade Mountains nearly to the Columbia River, and that the name Pacific Forest Reserve should be changed to Mt. Ranier Forest Reserve. The name paoific Forest Reserve is meaningless, and it is fitting that this He -serve should wear the name of the great glacier-covered mountain, one of the highest, most beautiful and interesting mountains in the United States which is its chief xiaturai feature. This was felt when the Reserve was established out to the people of Tecoma ait. Ranjer is Mt. 'Teeoma, and to avoid exciting locai jealousies the Secretary of the Interior at the last moment adopted an inexpressive and inappropriate ame. The untain is now known officially in this country and by all foreign geographers as Mt. Ranger and is nowhere oailed Teeoma beyond the limits of the city of that name; and there seems no longer02231