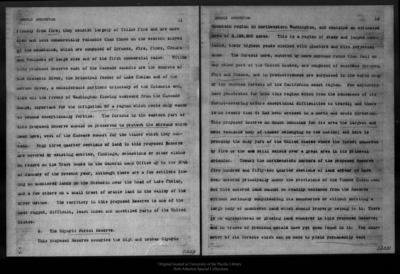 ARNOLD ARBORETUM. 11riously from fire; they consist largely of Yellow Pine and are more open and less commercially valuable than those on the western slopes of the mountains, which are composed of Spruces, Firs, Fines, Cedars and Hemlocks of large size and of the first commercial value. Within this proposed Reserve east of the Cascade summits are the sources of the Stehekin River, the principal feeder of Lake Chelan and of the [illegible] how River, a considerable northern tributary of the Columbia and, like all the rivers of Washington flowing eastward from the Cascade Range, important for the irrigation of a region which needs only water to become exceptionally fertile. The forests in the eastern part of this proposed Reserve should be preserved to protect the streams which head here; west of the Cascade summit for the timber which they contain. Only three quarter sections of land in this proposed Reserve are covered by existing entries, findings, selections or other claims on record on the Tract Books in the General Land Office up to the 20th of January of the present year, although there are a few settlers living on unentered lands on the Stehekin near the head of Lake Chelan, and a few others on a small tract of arable land in the valley of the upper Methow. The territory in this proposed Reserve is one of the most rugged, difficult, least known and unsettled parts of the United States.9. The Olympic Forest Reserve.This proposed Reserve occupies the high and broken Olympic02231ARNOLD ARBORETUM. 12Mountain region in northwestern Washington, and contains an estimated area of 2,188,800 acres. This is a region of steep and jagged mountains, their highest peaks clothed with glaciers and with perpetual snow. The forests here, watered by more copious rains than fall on any other part of the United States, are composed of enoribus Spruces, Firs and Cedars, and in productiveness are surpassed in the world only by the Redwood forests of the California coast region. Few explorers have penetrated far into this region which from, the denseness of its forest-covering offers exceptional difficulties to travel; and there is no record that it has been crossed in a north and south direction. This proposed Reserve no doubt contains for its area the largest and most valuable body of timber belonging to the nation; and here is probably the only part of the United States where the forest unmarked by fire or the axe still exists over a great area in its primeval splendor. Toward the northwestern borders of the proposed Reserve five hundred and fifty-two quarter sections of land appear to have been entered principally under the provisions of the Timber Claim Law, but this entered land cannot be readily excluded from the Reserve without seriously complicating its boundaries or without omitting a large body of unentered land which should properly belong to it. There is no agricultural or grazing land whatever in this proposed Reserve; and no traces of precious metals have yet been found in it. The character of its forests which can be made to yield permanently vast02231