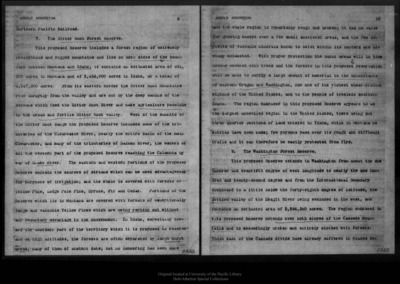 ARNOLD ARBORETUM 9Northern Pacific Railroad.7. The Bitter Root Forest Reserve.This proposed Reserve includes a forest region of extremely precipitous and rugged mountains and lies on both sides of the boundary between Montana and Idaho; it contains an estimated area of 691, 200 acres in Montana and of 3,456,000 acres in Idaho, or a total of 4,147,200 acres. From its eastern border the Bitter Root Mountains rise abruptly from the valley and are cut by the deep canons of the streams which feed the Bitter Root River and make agriculture possible in the broad and fertile Bitter Root valley. West of the summits of the Bitter Root Range the proposed Reserve includes some of the tributaries of the Clearwater River, nearly the entire basin of the main Clearwater, and many of the tributaries of Salmon River, the waters of all the western part of the proposed Reserve reaching the Columbia by way of Snake River. The eastern and western portions of the proposed Reserve contain the sources of streams which can be used advantageously for purposes of irrigation; and the whole is covered with forests of Yellow Pine, Lodge Pole Pine, Spruce, fir and Cedar. Portions of the Reserve which lie in Montana are covered with forests of exceptionally large and valuable Yellow Pines which are being rapidly cut without any pecuniary advantage to the Government. In Idaho, especially toward the southern part of the territory which it is proposed to reserve and at high altitudes, the forests are often separated by large burnt areas, many of them of ancient date; out no lumbering has been done02231ARNOLD ARBORETUM. 10and the whole region is remarkably rough and broken; it has no value for grazing except over a few small scattered areas, and the few deposits of valuable minerals known to exist within its borders are already exhausted. With proper protection the burnt areas will in time become covered with trees and the forests in this proposed reservation will be able to supply a large amount of material to the inhabitants of eastern Oregon and Washington, now one of the richest wheat-product regions of the United States, and to the people of treeless southern Idaho. The region embraced in this proposed Reserve appears to be the largest unsettled region in the United States, there being but three quarter sections of land entered in Idaho, while in Montana no entries have been made; few persons pass over its rough and difficult trails and it can therefore be easily protected from fire.8. The Washington Forest Reserve.This proposed Reserve extends in Washington from about the one hundred and twentieth degree of west longitude to nearly the one hundred and twenty-second degree and from the International Boundary southward to a little below the forty-eighth degree of latitude, the settled valley of the Skagit River being excluded in the west, and contains an estimated area of 3,594,240 acres. The region embraced in this proposed Reserve extends over both slopes of the Cascade Mountains and is exceedingly broken and entirely clothed with forests. These east of the Cascade divide have already suffered in places se-02231