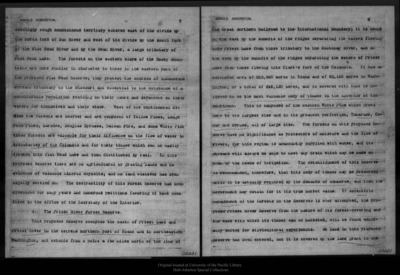 ARNOLD ARBORETUM. 7ceedingly rough mountanious territory watered east of the divide by the north fork of Sun River and west of the divide by the south fork of the Flat Head River and by the Swan River, a large tributary of Flat Head Lake. The forests on the eastern slope of the Rocky Mountains are here similar in character to those in the eastern part of the proposed Flat Head Reserve; they protect the sources of innumerable streams trioutary to the Missouri and essential to the existence of a considerable population residing on their banks and dependent on their waters for themselves and their stock. West of the continental divide the forests are heavier and are composed of Yellow Pines, Lodge Pole Pines, Larches, Douglas Spruces, Balsam Firs, and some White Fine these Forests are valuable for their influence on the flow of water in tributaries of the Columbia and for their timber which can be easily floated into Flat Head Lake and then distributed by rail. In this proposed Reserve there are no agricultural or grazing lands and no evidence of valuable mineral deposits; and no land whatever has been legally settled on. The desirability of this forest Reserve has been discussed for many years and numerous petitions favoring it have been filed in the office of the Secretary of the Interior.6. The Priest River Forest Reserve.This proposed Reserve occupies the basin of Priest Lake and Priest River in the extreme northern part of Idaho and in northeastern Washington, and extends from a point a few miles north of the line of02231ARNOLD ARBORETUM. 8the Great Northern Railroad to the International Boundary; it is bound on the east by the summits of the ridges separating the waters flowing into Priest lake from those tributary to the Kootenay River, and on the west by the summits of the ridges separating the waters of Priest Lake from those flowing into Clark's fork of the Columbia. It has an estimated area of 552,960 acres, and is covered with what is believed to be the most valuable body of timber in the interior of the continent. This is composed of the western White Pine which grows here to its largest size and in its greatest perfection, Tamarack, Cedar and Spruce, all of large size. The forests on this proposed Reserve have no significance as protectors of moisture and the flow of rivers, for this region is abundantly supplied with water, and its streams will always be able to meet any drain which may be made on them by the needs of irrigation. The establishment of this Reserve is recommended, therefore, that this body of timber may be preserved [illegible] it is actually required by the demands commerce, and that the Government may obtain for it its true market value. If scientific management of the forests on the Reserves is ever attempted, the proposed Priest River Reserve from the nature of its forest-covering and the case with which its timber can be marketed, will be found admirablysuited for [silvicultural] experiments. No land in this proposed Reserve has been entered, out it is covered by the land grant to the02231