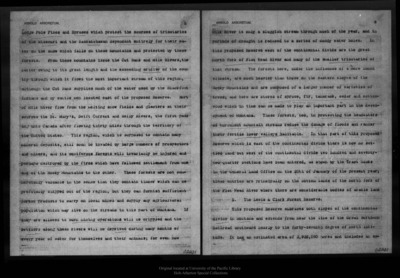 ARNOLD ARBORETUM.Lodge Pole Pines and Spruces which protect the sources of tributaries of the Missouri and the Saskatchawan dependent entirely for their water on the snow which falls on these mountains and protected by these forests. From these mountains issue the Cut Bank and Milk Rivers, the latter owing to its great length and the exceeding aridity of the country through which it flows the most important stream of this region, although the Cut Bank supplies much of the water used by the Blockfoot Indians and by cattle men located east of the proposed Reserve. North of Milk River flow from the melting snow fields and glaciers at their sources the St. Mary's, Swift Current and Belly Rivers, the first passing into Canada after flowing thirty miles through the territory of the United States. This region which is supposed to contain many mineral deposits, will soon be invaded by large numbers of prospectors and miners, and its coniferous forests will invariably of injured and perhaps destroyed by the fires which have followed settlement from one end of the Rocky Mountains to the other. These forests are not commercially valuable in the sense that they contain timber which can be profitably Shipped out of the region, but they can furnish sufficient forest-products to carry on local mines and supply any agricultural population which may live on the streams in this part of Montana. If they are allowed to burn missing operation will be crippled and the Settlers along these rivers will be deprived during many months of every year for themselves and their animals; for even now ARNOLD ARBORETUM. 6[Milk] River is only a sluggish stream through much of the year, and in periods of drought is reduced to a series of muddy water holes. In this proposed Reserve west of the continental divide are the great north fork of Plat Head River and many of the smaller tributaries of that stream. The forests here, under the influence of a [mure] humid climate, are much heavier than those on the eastern slopes of the Rocky Mountains and are composed of a larger number of varieties of trees; and here are stores of spruce, fir, tamarack, cedar and cotton-wood which in time can be made to play an important part in the development of Montana. These forests, too, in protecting the headwaters of turoulent mountain streams reduce the damage of floods and render their fertile lower valleys habitable. In that part of this proposed Reserve which is east of the continental divide there is now no settled land out west of the continental divide two hundred and seventy-two quarter sections have been entered, as shown by the Tract Books in the General Land Office on the 20th of January of the present year; these entries are principally on the bottom lands of the north fork of the flat Head River where there are considerable bodies of arable land5. The Lewis & Clark Forest Reserve.This proposed Reserve embraces Both slopes of the continental divide in Montana and extends from near the line of the Great Northern Railroad southward nearly to the forty-seventy degree of north latitude. It has an estimated area of 2,928,080 acres and includes an ex-02231