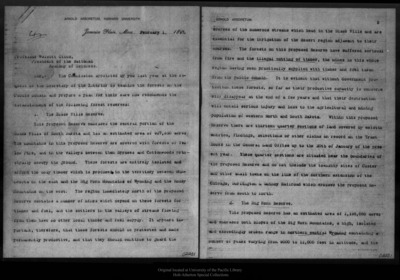 ARNOLD ARBORETUM, HARVARD UNIVERSITY.copyJamaica Plain, Mass., February 1, 1897Professor Wcicott GIDDS,President of the NationalAcademy of Sciences.Sir,- The Commission appointed by you last year at the request of the secretary of the Interior to examine tae forests on the public Demainand prepare a plan for their ears now recommends the establishment of the following forest reserves:1. The Black Hills Reserve.This proposed Reserve embraces the central portion of the Black Hills of South Dakota and has an, estimated area of 967,660 acres, The mountains in this proposed Reserve are covered with forests of Yellow Pine, and in the valleys between them Spruces and Cottonwoods principally occupy the ground. These forests are entirely isolated and afford the only timber which is produced in the territory between Minister on the east and the big Mountains of Wyoming and the Rocky Mountains on the west. The region immediately north of the proposed Reserve contains a number of mines which depend on these forests for timber and fuel, and the settlers in the valleys of streams flowing from them have no other local timber and Tuel supply. It appears important, therefore, that these forests should be protected and made permanently productive, and that they should continue to guard theARNOLD ARBORETUM 2sources of the numerous streams which head in the Black Hills and are essential for the irrigation of the desert region adjacent to their courses. The forests on this proposed Reserve have suffered serious! from fire and the illegal, cutting of timber, the mines in this whole region having been practically Supplied with timber and fuel taken from the public domain. It is evident that without Government protection these forests, so far as their productive capacity is concern will disappear at the end of a few years and that their destruction will entail serious injury and loss to the agricultural and mining population of western Worth and South Dakota. Within this proposed. Reserve there are thirteen quarter selections of land covered by existing entries, findings, selections or other claims on record on the Tract Book's in the General land Office up to the 20th of January of the present year. These quarter sections are situated near the boundaries of the proposed Reserve and do not include the township sites of Custer and other small towns on the line of the northern extension of the Chicago, Burlington & Quincy Railroad which crosses the proposed Reserve from south to north.2. The Big Horn Reserve.This proposed Reserve has an estimated area of 1,108,080 acres and embraces both slopes of the Big Horn Mountains, a high, isolated and exceedingly broken range in northern central Wyoming containing a number of peaks varying from 9000 to 11,000 feet in altitude, and the0223