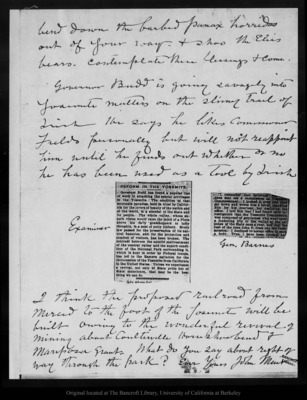 but down the barbed panax horrid as out of your way & show the Elias bears. Contemplate these blessings to come.Governor Budd is going savagely into Yosemite matters on the slimy trail of Irish He says he likes Commissioner Fields personally but will not reappoint him until he finds out whether or no he has been used as a tool by drink.Examiner[newspaper clipping]REFORM IN THE YOSEMITE.Governor Budd has found a popular line of work in attacking the special priveliges in the Yosemite. The condition of that mountain paradise, held in trust by California for the lovers of beauty of the nation and of the world, is a scandal to the State and its people. The whole valley, whose superb vistas would raise the mind of a Plute above his daily grasshoppers to lofty thoughts, is a nest of petty jobbery. Every law passed for the preservation of its natural beauties, and for the protection and comfort of visitors, has been broken. The contrast between the squalid maltreatment of the central valley and the superb condition of the National Park surrounding it, which is kept in order by federal troops, has led to the Eastern agitation for the retrocession of the Yosemite from California to the United States. Unless we experience a revival, not only of State pride but of State conscience, that may be the best thing we can do.Gen. Barnes[newspaper clipping]"I remember that Governor [illegible] once sent me a commission as Yosemite Commissioner. I looked it over and then sat down and wrote him a letter, thanking him for his courtesy, but declining the office. I told him that I found upon investigation that the Yosemite Commission was composed of gentlemen who went upon a junketing trip to the valley at the expense of the State once a year, and that the rest of the time John P. Irish ran the Commission. I declined to accept office in such a body. True, I have been Colonel and [illegible]I think the proposed railroad from Merced to the foot of the Yosemite will be built owning to the wonderful removal of mining about [Coulterville?] Horseshoe bend & Mariposa Granat. What do you say about right of way through the park?Ever YoursJohn Muir