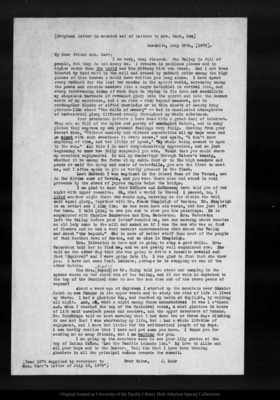 [Original letter in mounted set of letters to Mrs. Carr, #44]Yosemite, July 29th, [1870].My dear friend Mrs. Carr:I am very, very blessed. The Valley is full of people, but they do not annoy me. I revolve in pathless places and in higher rocks than the world and his ribbony wife can reach. Had I not been blunted by hard work in the mill and crazed by Sabbath raids among the high places of this heaven I would have written you long since. I have spent every Sabbath for the last two months in the spirit world, screaming among the peaks and outside meadows like a negro Methodist in revival time, and every intervening clump of week days in trying to fix down and assimilate my shapeless harvests of revealed glory into the spirit and into the common earth of my existence, and I am rich - rich beyond measure, not in rectangular blocks of sifted knowledge or in thin sheets of beauty hung picture-like about "the walls of memory" — but in unselected atmospheres of terrestrial glory diffused evenly throughout my whole substance.Your Brooksian letters I have read with a great deal of interest. They are so full of the spice and poetry of unmingled Nature, and in many places they express my own present feelings very fully. Quoting from your Forest Glen, "Without anxiety and without expectation all my days come and go mixed with such sweetness to every sense," and again, "I don't know anything of time, and but little of space," "My whole being seemed to open to the sun." All this I do most comprehensively appreciate, and am just beginning to know how fully congenial you are. Would that you could share my mountain enjoyments! In all my wanderings through Nature's beauty, whether it be among the ferns at my cabin door or in the high meadows and peaks or amid the spray and music of waterfalls, you are the first to meet me, and I often speak to you as verily present in the flesh.Last Sabbath I was baptized in the irised foam of the Vernal, and in the divine snow of Nevada, and you were there also and stood in real presence by the sheet of joyous rapids below the bridge.I am glad to know that McClure and McChesney have told you of our night with upper Yosemite. Oh, what a world is there! I passed, no, I lived another night there two weeks ago, entering as far within the veil amid equal glory, together with Mr. Frank Shapleigh of Boston. Mr. Shapleigh is an artist and I like him. He has been here six weeks, and has just left for home. I told [him] to see you and to show you his paintings. He is acquainted with Charles Sanderson and Mrs. Waterston. Mrs. Waterston left the Valley before your letter* reached me, but one morning about sunrise an old lady came to the mill and asked me if I was the man who was so fond of flowers and we had a very earnest unceremonious chat about the Valley and about "the beyond." She is made of better stuff than most of the people of that heathen town of Boston, and so also is Shapleigh.Mrs. Yelverton is here and is going to stop a good while. Mrs. Waterston told her to find me, and we are pretty well acquainted now. She told me the other day that she was going to write a Yosemite novel!! and that "Squirrel" and I were going into it. I was glad to find that she knew you. I have not seen Prof. LeConte ; perhaps he is stopping at one of the other hotels.Has Mrs. Rapelye or Mr. Colby told you about our camping in the spruce woods on the south rim of the Valley, and of our walk at daybreak to the top of the Sentinel dome to see the sun rise out of the crown peaks of beyond?About a week ago at daybreak I started up the mountain near Glacier Point to see Pohono in its upper woods and to study the kind of life it lived up there. I had a glorious day, and reached my cabin at daylight, by walking all night. And, oh, what a night among those moonshadows! It was 1 o'clock A.M. when I reached the top of the Cathedral rocks, a most glorious 24 hours of life amid nameless peaks and meadows, and the upper cataracts of Pohono. Mr. Hutchings told me next morning that I had done two or three days climbing in one and that I was shortening my life, but I had a whole lifetime of enjoyment, and I care but little for the arithmetical length of my days.I can hardly realize that I have not yet seen you here. I thank you for sending me so many friends, but I am waiting for you. I am going up the- mountain soon to see your lily garden at the top of Indian Cañon. 'Let the Pacific islands lie.' My love to Allie and all your boys and to the Doctor. Tell him that I have been tracing glaciers in all the principal cañons towards the summit.[Year 1870 suppiled by reference to Mrs. Carr's letter of July 10, 1870*]Ever thine,J. Muir