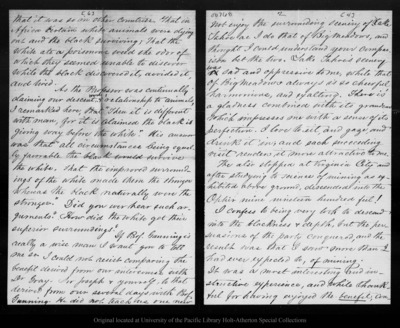 [6]that it was so in other countries, that in Africa certain white animals were dying out and the black surviving; that the white ate a poisonous weed the odor of which they seemed unable to discover while the black discovered it, avoided it, and lived. As the Professor was continually claiming our descent [ route?] & relationship to animals, I remarked here, [deleted: that] “Then it is different with man, for it is claimed the black is giving way before the white”. His answer was that “all circumstances being equal- ly favorable the black would survive the white. That the improved surround- ings of the white made them the stronger where as the black naturally were the stronger.” Did you ever hear such ar- guments.” How did the white get their superior surroundings? If Prof. Gunning is really a wise man I want you to tell me so I could not resist comparing the benefit derived from our intercourse with Dr Gray. Sir Joseph & yourself, to that derived from our several days with Prof. Gunning. He did not teach us one new00768 2 [4]not enjoy the surrounding scenery of Lake Tahoe as I do that of Big Meadows, and thought I could understand your compare- ison bet the two. Lake Tahoe’s scenery was sad and oppressive to me, while that of Big Meadows always is so cheerful, harmonious, and exalting. There is a gladness combined with its grandeur which impresses me with a sense of its perfection. I love to sit, and gaze, and drink it in; and each succeeding visit renders it more attractive to me. We also stopped at Virginia City and after studying to science of mining as ex- hitited above ground, descended into the Ophir mine nineteen hundred feet! I confess to being very [illegible] to descend into the blackness & depth, but the per- suasions of the party conquered, and the result was that I saw more than I had ever expected to, of mining. It was a most interesting and in- structive experience, and while thank- ful for having enjoyed the [underlined: benefit], con-