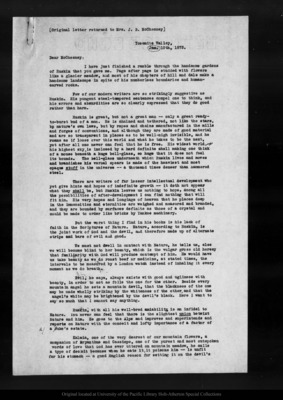 [Original letter returned to Mrs. J. B. McChesney]Yosemite Valley,Jun. l0th, 1873.Dear McChesney:I have just finished a ramble through the handsome gardens of Ruskin that you gave me. Page after page is studded with flowers like a glacier meadow, and most of his chapters of hill and dale make a handsome landscape in spite of his numberless boundaries and human-carved rocks.Few of our modern writers are so strikingly suggestive as Ruskin. His pungent steel-tempered sentences compel one to think, and his errors and absurdities are so clearly expressed that they do good rather than harm.Ruskin is great, but not a great man -- only a great ready-to-burst bud of a man. He is chained and tethered, not like the stars, by. nature's own laws, but by ropes and chains manufactured in the mills and forges of conventions, and although they are made of good material and are so transparent in places as to be well-nigh invisible, and he roams as if loose over this world and what he takes to be the next, yet after all one never can feel that he is free. His widest world,^ his highest sky is inclosed by a hard definite shell making one think of a mouse beneath a huge bell-glass, so huge that it does not feel its bounds. The bell-glass underneath which Ruskin lives and moves and brandishes his verbal spears is made of the heaviest and most opaque stuff in the universe — a thousand times denser than hammered steel.There are writers of far lesser intellectual development who yet give hints and hopes of indefinite growth — it doth not appear what they shall be, but Ruskin leaves us nothing to hope, among all the possibilities of after-development I can find nothing that will fit him. His very hopes and longings of heaven that he places deep in the immensities and eternities are weighed and measured and branded, and they are bounded by surfaces definite as those of a crystal and could be made to order like bricks by Yankee machinery.But the worst thing I find in his books is his lack of faith in the Scriptures of Nature. Nature, according to Ruskin, is the joint work of God and the devil, and therefore made up of alternate strips and bars of evil and good.We must not dwell in contact with Nature, he tells us, else we will become blind to her beauty, which is the vulgar gross old heresy that familiarity with God will produce contempt of him. He would have us take beauty as we do roast beef or medicine, at stated times, the intervals to be measured by a London watch instead of inhaling it every moment as we do breath.Evil; he says, always exists with good and ugliness with beauty, in order to act as foils the one for the other. Beside every mountain angel he sets a mountain devil, that the blackness of the one may be made wholly striking by the whiteness of the other, and that the angel's white may be brightened by the devil's black. Here I want to say so much that I cannot say anything.Ruskin, with all his well-bred amiability is an infidel to Nature, you never can feel that there is the slightest union betwixt Nature and him. He goes to the Alps and improves and superintends and reports on Nature with the conceit and lofty importance of a factor of a duke's estate.Kalmia, one of the very dearest of our mountain flowers, a companion of Bryan thus and Cassiope, one of the purest and most outspoken words of love that God has ever uttered on mountain meadow, he calls a type of deceit because when he eats it, it poisons him -- is unfit for his stomach -- a good English reason for setting it on the devil's