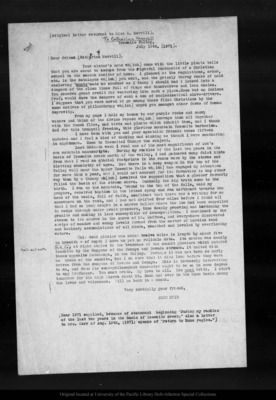 [original letter returned to Miss M. Merrill].To Catherine MerrillYosemite Valley,July 12th, [1871].Dear friend [Catharine Merrill]:Your sister's note wh[ich] came with the little plants tells that you are about to escape from the frightful tendencies of a Christian school to the smooth shelter of home. I glanced at the regulations, order, etc. in the catalogue wh[ich] you sent, and the grizzly thorny ranks of cold enslaving "musts" made me shudder as I fancy I should had I looked into a dungeon of the olden times full of rings and thumbscrews and iron chains.You deserve great credit for venturing into such a place. None but an Indiana Prof. would dare the dangers of such a den of ecclesiastical slave-drivers, I suppose that you were moved to go among those flint Christians by the same motives of philanthropy wh[ich] urged you amongst other forms of human depravity.From my page I hold my bosom to our purple rocks and snowy waters and think of the divine repose wh[ich] enwraps them all together with the tuned flies, and birds and plants which inhabit them, and I thank God for this tranquil freedom, this glorious mountain Yosemite barbarism.I have been with you and your apostolic friends these fifteen minutes and I feel a kind of choking and sinking as though I were smothering in nightmare. Come to Yosemite! Change the subject.Last Sabbath week I read one of the most magnificent of God's own mountain manuscripts. During my rambles of the last two years in the basin of Yosemite creek north of the valley, I had gathered many faint hints from what I read as glacial footprints in the rocks worn by the storms and blotting chemistry of ages. Now there is a deep canyon in the top of the Valley wall near the upper Yosemite Falls wh[ich] has engaged my attention for more than a year, and I could not account for its formation in any other way than by a theory wh[ich] involved the supposition that a glacier formerly filled the basin of the stream above. Suddenly the big truth came to the birth. I ran up the mountain, 'round to the top of the falls, said my prayers, received baptism in the irised spray and ran northward towards the head of the basin, full of faith, confident that there was a writing for me somewhere on the rock, and i had not drifted four miles before I found all that I had so long sought in a narrow hollow where the ice had been compelled to wedge through under great pressure, thus deeply grooving and hardening the granite and making it less susceptible of decomposition. I continued up the stream to its source in the snows of lit. Hoffman, and everywhere discovered strips of meadow and sandy levels formed from the matter of moraine sand and bouldery accumulations of all kinds, smoothed and leveled by overflowing waters.This dead glacier was about twelve miles in length by about five in breadth - of depth I have as yet no reliable data. Its course was nearly north and south at right angles to the branches of the summit glaciers which entered Yosemite by the Canyons of the Tenaya and Nevada streams. It united with those opposite Hutchings, in the Valley. Perhaps it was not born so early as those of the summits, but I am sure that it died long before they were driven from the canyons of Nevada and Tenaya. This is intensely interesting to me, and from its semi-philosophic character ought to be so in some degree to any Professor. You must write. My love to all. You must write. I start tomorrow for the high Sierra about Mt. Dana and over in the Mono basin among the lavas and volcanoes. Will be back in a month.Very cordially your friend,JOHN MUIR[Year 1871 supplied, because of statement beginning "During my rambles of the last two years in the basin of Yosemite creek;" also a letter to Mrs. Carr of Aug. 13th, (1871) speaks of "return to Mono region."]