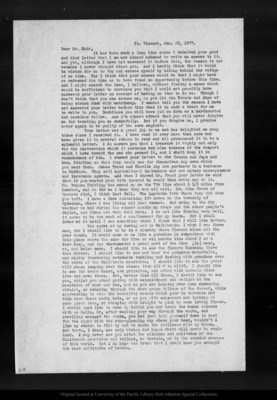 St. Vincent, Jan. 22, 1877.Dear Mr. Muir,It has been such a long time since I received your good and kind letter that I am now almost ashamed to write an answer to it. And yet, although I have not answered it before this, the reason is not because I never thought about you. And I hardly think that it would be wisdom for me to try and excuse myself by hiding behind the refuge of no time. For I think that your answer would be that I might have so redeemed the time as to have found an opportunity before this time. And I might search the land, I believe, without finding a cause which would be sufficient to convince you that I could not possibly have answered your letter on account of having no time to do so. Though I don't think that you can accuse me, as you did the Trouts and Jays of being struck dumb with matrimony. I cannot tell you the reason I have not answered your letter before this when it is such a treat for me to write to you. Doubtless you will have put me down as a hardhearted and careless fellow. And I'm almost afraid that you will never forgive me for treating you so shamefully. But if you forgive me, I promise never again to be guilty of the same neglect.Your letter was a great joy to me and has delighted me many times since I received it. I have read it over more than once and have given it to several others to read and all pronounced it to be a splendid letter. I do assure you that I treasure it highly not only for the instruction which it contains but also because of the respect which I have toward the one who penned it, and I shall keep it in remembrance of him. I showed your letter to the Trouts and Jays and Mrs. Stirling so that they could see for themselves any news which you sent them. James Trout and Charlie Jay are partners in a business in Meaford. They sell agricultural implements and are notary conveyancers and insurance agents. And when I showed Mr. Trout your letter he said that if you wanted your life insured he would then write and do it. Mr. Duncan Stirling has moved up on the 7th line about 1 l/2 miles from Meaford, and so far as I know they are all well. Mr. John Trout of Toronto died, I think last fall. The Laycocks live where they did when you left. I have a farm containing 100 acres in the township of Sydenham, where I was living all last summer. But owing to the dry weather we had during the summer months my crops and the other people's failed, and times are very dull here. I do not like farming very well, it seems to be too much of a confinement for my taste. But I shall labor at it until I see something which I think that I will like better.You spoke of my coming out to California: I wish I was there now, for I should like to be in a country where flowers bloom all the year round. It would seem to me like a paradise in comparison with this place where the snow for five or six months lies about 3 or 4 feet deep, and the thermometer a great part of the time [is] near, at, and below zero. I should like to see the flowers blooming there this winter. I should like to see and hear the gorgeous waterfalls, and mighty thundering cataracts tumbling and dashing with grandeur over the rocks of the California mountains. I should like to see the great wild sheep leaping over the chasms from cliff to cliff. I should like to see the brown bears, and grizzlies, and other wild animals which live and move there. But, better than all these, I should like to see you, whilst you stand gazing with astonishment and delight at the mountains of snow and ice, and as you are leaping over some murmuring rivulet, or brushing through the dark green foliage of the forest, while approaching to view the beautiful waters which pour in torrents and bulk down their rocky beds, or as you with amazement are looking at some giant tree, or stooping with delight to pick up some lovely flower. I should just like to come up behind you and break the human silence with an hello. Or, after wending your way through the woods, and strolling amongst the rocks, you had just lain yourself down to rest for the night with the star-gleaming sky above your head, wouldn't I like my shadow to flit by and to awake the stillness with my voice. But these, I fear, are only wishes and hopes which will never be realized. I may never see you midst the silences and solitudes of the California mountains and valleys, or forests, or in the crowded avenues of this world. Yet I do hope and trust that I shall know you amongst the vast multitudes of heaven.211