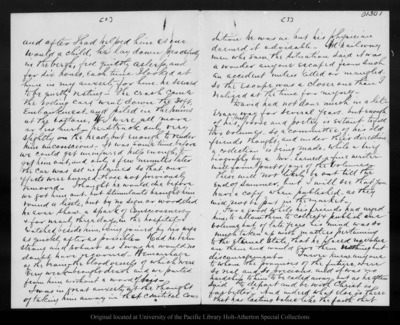 [2]and after I had helped him as one would a child, he lay down peacefully in the berth, fell quietly asleep and for six hours, each time I looked at him in my anxiety for him he seemed to be quietly resting_ The crash came the rolling cars went down the soft embankment and piled in the ruins at the bottom. We were all more or less hurt_ he struck only very slightly on the head_but enough to render him unconscious. It was some time before we could get uninjured help enough, to get him out, and only a few minutes later the car was all in flames so that our effects were burned - those not previously removed. I thought he would die before we got him out but stimulants brought him around a little, but by no sign or word, did he ever show a spark of consciousness_ & for nearly three days in the hospital I watched beside him, being joined by his wife as quickly after as possible_ Had he been strong and robust as I was he would no doubt have recovered_ Hemorrhage of the brain_ the blood vessels of which were very weak_brought death and we parted from him without a word of his_I was in great anxiety at the thought of taking him away in that critical con=01301[3]dition he was in but his physician deemed it advisable. The railway men who saw the situation said it was a wonder anyone escaped from such an accident unless killed or mangled. So the escape was a closer on than I realized at the time for myself_David had not done much in a lit- erary way for several years but enough of his best prose and poetry is extant to fill two volumes_ so a committee of his old friends thought and under their directions a collection is being made, while a brief biography by a Mr. [Larned?] -a fine writer- will form part of one of the volumes These will not likely be out till the end of summer, but I will see that you have a copy when published_ as they will not be put in the market_Has a good while his friends had urged him to allow them to collect & publish one volume but of late years his mind was so much taken up with matters pertaining to the eternal state, that he placed no value on them and would give them nothing but discouragement_ I never knew anyone to whom the promises of the future, were so real, and so precious. and it was no hardship to him to be called away, but as he often said "to depart and be with Christ is far better"_ And indeed what else is there that has lasting value like the faith that