Letter from John Muir to [Annie and John Bidwell and Sallie Kennedy], 1877 Oct 10. 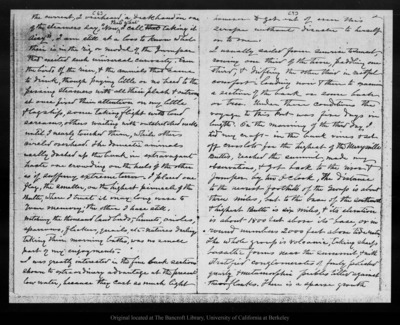 [6]the current, I overheard a deck hand on one of the steamers say, "Now that's what I call taking it Aisy". I am still at a loss to know what there is in the rig or model of the Jumper that excited such universal curiosity. Even the birds of the river, & the animals that came to drink, though paying little or no heed to the passing steamers with all their plash & outroar, at once fixed their attention on my little flagship, some taking flight with loud screams, others waiting with outstretched necks until I nearly touched them, while others circled overhead. The domestic animals usally dashed up the bank in extravagant haste one crowding on the heels of the other as if suffering extreme terror. I placed one flag, the smaller, on the highest pinnacle of the Butte, where I trust it may long wave to your memory, the other I have still, watching the thousand land birds; linnets, orioles, sparrows, flickers, quails, etc. natures darlings taking their morning baths, was no small part of my enjoyments. I was greatly interested in the fine bank sections shown to extraordinary advantage at the present low water, because they cast so much light[4] 2however to get out of even this scrape without disaster to herself or to me. I usually sailed from sunrise to sunset, rowing one third of the time, paddling one third, & drifting the other third in restful comfort - landing now & then to examine a section of the bank or some bush or tree. Under these conditions the voyage to this port was five days in length. On the morning of the third day I hid my craft in the bank vines & set off cross lots for the highest of the Marysville Buttes, reached the summit, made my observations, & got back to the river & jumper by two o clock, the distance to the nearest foothills of the groups is about three miles, but to the base of the southmost & highest Butte is six miles, & its elevation is about 1800 feet above its base, or in round numbers 2000 feet above tide water. The whole group is volcanic, taking sharp basaltic forms near the summit, & with stratified conglomerates of finely polished quartz & metamorphic pebbles tilted against the flanks. There is a sparse growth