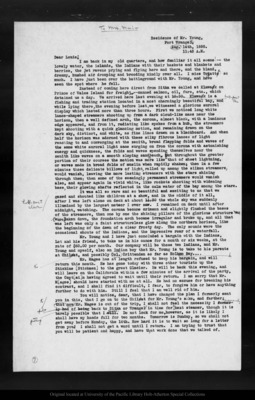 To Mrs. MuirResidence of Mr. Young,Fort Wrangell, Aug. 14th, 1880.11:45 A.M.Dear Louie; I am back in my old quarters, and how familiar it all seems -- the lovely water, the islands, the Indians with their baskets and blankets and berries, the jet ravens prying and flying here and there, and the bland,dreamy, hushed air drooping and brooding kindly over all. I miss Toyatte so much. I have just been over the battleground with Mr. Young, and have seen the spot where he fell.Instead of coming here direct from Sitka we called at Klawak on Prince of Wales Island for freight -- canned salmon, oil, furs, etc., which detained us a day. We arrived here last evening at half-past ten. Klawak is a fishing and trading station located in a most charmingly beautiful bay, and while lying there, the evening before last, we witnessed a glorious auroral display which lasted more than three hours. First we noticed long white lance-shaped streamers shooting up from a dark cloud-like mass near the horizon, then a well defined arch, the corona, almost black, with a luminous edge appeared, and from it, radiating like spokes from a hub, the streamers kept shooting with a quick glancing motion, and remaining drawn on the dark sky, distinct, and white, as fine lines drawn on a blackboard. And when half the horizon was adorned with these silky fibrous lances of lightreaching to and converging at the zenith, broad flapping folds and waves ofthe same white auroral light came surging on from the corona with a rgy and quickness, the folds and waves spending themselves near the zenith like waves on a smooth sloping sand-beach, But throughout the greater portion of their courses the motion was more like that of sheet lightning, or wave made in broad folds of muslin when rapidly shaken; then in a few minutes those delicate billows of light, rolled up among the silken streamers,would vanish, leaving the more lasting streamers with the stars shining through them; then some of the seemingly permanent streamers would vanish salso, and appear again in vivid white, like rockets shooting with widening base, their glowing shafts reflected in the calm water of the bay among the stars.It was all so rare and so beautiful and exciting to us that we gazed and shouted like children at a show, and in the middle of it all,after I was left alone on deck at about half-past eleven the whole sky was suddenly illumined by the largest meteor I ever saw. I remained on deck until after midnight, watching. The corona became crimson and slightly flushed the bases of the streamers, then one by one the shining pillars of the glorious structure were taken down, the foundation arch became irregular and broke up, and all that was left was only a faint structureless glow along the northern horizon, like the beginning of the dawn of a clear frosty day. The only sounds were the occasional shouts of the Indians, and the impressive roar of a waterfall.Mr. Young and I have just concluded a bargain with the Indians, Lot and his friend, to take us in his canoe for a month or six weeks, at the rate of $60.00 per month. Our company will be those two Indians, and Mr.Young and myself, also an Indian boy that Mr. Young is to take to his parents at Chilkat, and possibly Col. Crittenden as far as Holkham Bay.... Mr. Magee has at length refused to keep his bargain, and will return this month. He has gone today with three other tourists up the Stickine [Stickeen] to the great Glacier. He will be back this evening, and will leave on the California within a few minutes of the arrival of the party,the Capt[ai]n having agreed to wait until their return. I am sorry that Mr.M[agee] should have started with me at all. He had no excuse for breaking his contract, and I shall find it difficult, I fear, to forgive him or have anything further to do with him. Still I feel that I am well rid of him.You will notice, dear, that I have changed the plan I formerly sent you in this, that I go on to the Chilkat for Mr. Young's sake, and farther; now that Mr. Magee is out of the trip, I shall not feel the necessity I previously falt of getting back to Sitka or Wrangell in time for the next steamer, though it is barely possible that I shall. Do not look for me, however, as it is likely I shall have my hands full for two months. Tomorrow is Sunday, so we shall not get away before Monday, the 16th. How hard it is to wait so long for a letter from you! I shall not get a word until I return. I am trying to trust that you will be patient and happy, and have that work done that we talked of.7