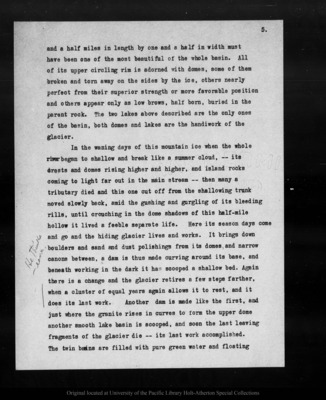 5.and a half miles in length by one and a half in width must have been one of the most beautiful of the whole basin. All of its upper circling rim is adorned with domes, some of them broken and torn away on the sides by the ice, others nearly perfect from their superior strength or more favorable position and others appear only as low brows, half born, buried in the parent rock. The two lakes above described are the only ones of the basin, both domes and lakes are the handiwork of the glacier.In the waning days of this mountain ice when the whole river began to shallow and break like a summer cloud, -- its drests and domes rising higher and higher, and island rocks coming to light far out in the main stream -- then many a tributary died and this one cut off from the shallowing trunk moved slowly back, amid the gushing and gurgling of its bleeding rills, until crouching in the dome shadows of this half-mile hollow it lived a feeble separate life. Here its season days come and go and the hiding glacier lives and works. It brings down boulders and sand and dust polishings from its domes, and narrow canons between, A dam is thus made curving around its base, and beneath working in the dark it has scooped a shallow bed. Again there is a change and the glacier retires a few steps farther, when a cluster of equal years again allows it to rest, and it does its last work. Another dam is made like the first, and just where the granite rises in curves to form the upper dome another smooth lake basin is scooped,and soon the last leaving fragments of the glacier die -- its last work accomplished. The twin basins are filled with pure green water and floating