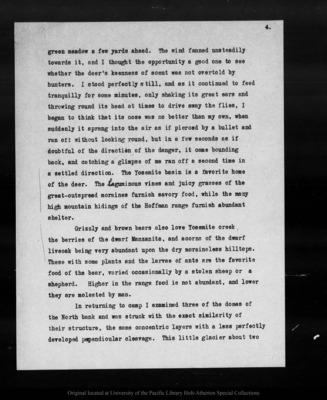 4green meadow a few yards ahead. The wind fanned unsteadily towards it, and I thought the opportunity a good one to see whether the deer's keenness of scent was not overtold by hunters. I stood perfectly still, and as it continued to feed tranquilly for some minutes, only shaking its great ears and throwing round its head at times to drive away the flies, I began to think that its nose was no better than my own, when suddenly it sprang into the air as if pierced by a bullet and ran off without looking round, but in a few seconds as if doubtful of the direction of the danger, it came bounding back, and catching a glimpse of me ran off a second time in a settled direction. The Yosemite basin is a favorite home of the deer. The leguminous vines and juicy grasses of the great-outspread moraines furnish savory food, while the many high mountain hidings of the Hoffman range furnish abundant shelter.Grizzly and brown bears also love Yosemite creek the berries of the dwarf Manzanita, and acorns of the dwarf liveoak being very abundant upon the dry moraineless hilltops.These with some plants and the larvae of ants are the favorite food of the bear, varied occasionally by a stolen sheep or a shepherd. Higher in the range food is not abundant, and lower they are molested by man.In returning to camp I examined three of the domes of the North bank and was struck with the exact similarity of their structure, the same concentric layers with a less perfectly developed perpendicular cleavage. This little glacier about two