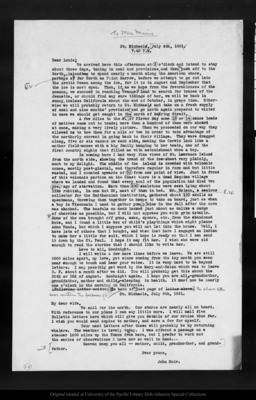 To Mrs, MuirSt. Michael, 7:40 P.M July 4th, 1881. Dear Louie;We arrived here this afternoon at 3 o'clock and intend to stay about three days, taking in coal and provisions, and then To push off to the North, We intend to spend nearly a month along the American shore, perhaps as far North as Point Barrow, before we attempt to go out into the Arctic Ocean among the ice, for it is in August and September that the ice is most open. Then, if, as we hope from the favorableness of the season, we succeed in reaching Wrangell Land to search for traces of the Jeanette, or should find any sure tidings of her, we will be back in sunny, iceless California about the end of October, in grape time.Otherwise we will probably return to St. Michael and take on a fresh supply of coal and nine months' provisions, and go north again prepared to winter in case we should get caught in the north of Bering Strait.A few miles to the north of Plover Bay some 13 or 14 canoe loads of natives came out to trade; more than a hundred of them were aboard at once, making a very lively picture.When we proceeded on our way they allowed us to tow them for a mile or two in order to take advantage of the northerly current in going back to their village. They were dragged along, five or six canoes on each side, making the Corwin look like a mother field-mouse with a big family hanging to her teats, one of the first country sights that filled me with astonishment when a boy.In coming here I had very fine views of St. Lawrence Island from the north side, showing the trend of the ice-sheet, very plainly, much to my delight.The middle of the island is crowded with volcanic cones, mostly post-glacial, and therefore regular in form and but little wasted, and I counted upwards of 50 from one point of view. Just in front of this volcanic portion on the Coast there is a dead Esquimo village where we landed and found that every soul of the population had died two yrs. ago of starvation. More than 200 skeletons were seen lying about like rubbish, in one hut 30, most of them in bed. Mr. E. W. Nelson, a zealous collector for the Smithsonian Institution, gathered about 100 skulls as specimens, throwing them together in heaps to take on board, just as when a boy in Wisconsin I used to gather pumpkins in the fall after the corn was shocked.The boxfuls on deck looked just about as unlike a cargo of cherries as possible, but I will not oppress you with grim details.Some of the men brought off guns, axes, spears, etc.,from the abandoned huts, and I found a little box of child's playthings which might please Anna Wanda, but which I suppose you will not let into the house. Well, I have lots of others that I bought, and when last here I engaged an Indian to make her a little fur suit, which I hope is ready so that I can send it down by the St. Paul.I hope it may fit her.I wish she were old enough to read the stories that I should like to write her.Love to all, Goodnight.I will write a few more lines before we leave. We are still 2000 miles apart, my love, yet since coming from the icy north you seem near enough to touch and hear your voice.It is very hard to be beyond letters.I may possibly get word by the Mary-and-Helen which was to leave S. F. about a month after we did.You will probably get this about the 20th or 22d of August.Goodnight again.I hope you are all-grandmother, grandfather, mother and child-sleeping in health.It must now be nearly One o'clock in the morning in California.On back of the last page of the above letter was written the following St. Michaels, July 8th, 1881.My dear wife,We sail for the north.Our stores are nearly all on board. With reference to our plans I can say little more.I will mail five Bulletin letters here which will give you details of our cruise thus far. I wish you would send copies to mother, and save a few for myself.Your next letters after these will probably be by returning whalers. The weather is lovely to-day. I was offered a passage on a steamer 1600 miles up the Yukon from here, but I prefer to work out the series of observations I have now so well in hand....Ever yours,John Muir.20