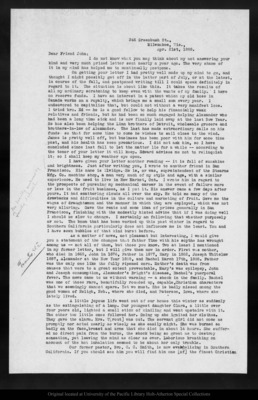 346 Greenbush St.,Milwaukee, Wis.,Apr. 21st, 1888.Dear Friend John:I do not know what you may think about my not answering your kind and very much prized letter sent nearly a year ago. The very shame of it in my mind has helped me to continually postpone.On getting your letter I had pretty well made up my mind to go, and thought I might possibly get off in the latter part of July, or at the latest, in course of the fall, and postponed writing till I could speak definitely in regard to it. The situation is about like this. It takes the results of all my ordinary scratching to keep even with the wants of my family. I have no reserve funds. I have an interest in a patent which my old boss in Canada works on a royalty, which brings me a small sum every year. I endeavored to capitalize that, but could not without a very manifest loss. I tried bro. Ed -- he is a good fellow to help his financially weak relatives and friends, but he had been so much engaged helping Alexander who had been a long time sick and is now finally laid away at the last New Year. He has also been helping the Linn brothers of Detroit, wholesale grocers and brothers-in-law of Alexander. The last has made extraordinary calls on his funds so that for some time to come he wishes to sail close to the wind. James is pretty well off, but business has been poor with him for some time past, and his health has been precarious. I did not ask him, so I have concluded since last fall to let the matter lie for a while -- according to the tenor of your letter it will keep. Edward advises me not to relinquish it; so I shall keep my weather eye open.I have given your letter another reading -- it is full of sunshine and brightness. Just after writing you, I wrote to another friend in San Francisco. His name is Elvidge. He is, or was, supreintendent of the Stearns Mfg. Co. machine shop, a man very much of my style and age, with a similar experience. He used to live in New Market, Ont. I wrote him in regard to the prospects of pursuing my mechanical career in the event of failure more or less in the fruit business, as I put it. His answer came a few days after yours. It had scattering clouds all over the sky. He told me many of the drawbacks and difficulties in the culture and marketing of fruit. Gave me the wages of draughtsmen and the manner in which they are employed, which was not very alluring. Gave the rents and some idea of prices generally in San Francisco, finishing with the modestly hinted advice that if I was doing well I should be slow to change. I certainly am following that whether purposely or not. The boom that has been worked up this past winter in regard to Southern California particularly does not influence me in the least. You and I have seen bubbles of that kind burst before.As a matter of news, not pleasant but interesting, I would give you a statement of the changes that father Time with his scythe has wrought among us -- not all of them, but those you know. Two at least I mentioned in my former letter, but I will give them now in order. First was mother, who died in 1869, John in 1876, Father in 1877, Mary in 1882, Joseph Whitelaw 1887, Alexander at the New Year 1888, and Rachel March 17th, 1888. Father was the only one like the fully ripened corn. Mother's death was from causes that were to a great extent preventable, Mary's was epilepsy, John and Joseph consumption, Alexander's Bright's disease, Rachel's puerperal fever. The news came to us without warning -- a shock in the family. Rachel was one of those rare, beautifully rounded up, capable, Christian characters that we seemingly cannot spare. Yet we must. She is badly missed among the good women of Neligh, Neb. where she died, and Paterson, Iowa, where she lately lived. A little joyous life went out of our house this winter as suddenly as the extinguishing of a lamp. Our youngest daughter Clara, a little over four years old, lighted a small stick of kindling and went upstairs with it. The other two little ones followed her. Going up she ignited her clothes. They gave the alarm. Mrs. T[rout] was out. The servant girl did not come as promptly nor acted nearly as wisely as she easily might. She was burned so badly on the face, breast and arms that she died in about 14 hours. She suffered no direct pain from the burns, the shock being so great as to destroy sensation, yet leaving the mind as clear as ever. Laborious breathing on account of the hot inhalation seemed to be about her only trouble.Our former pastor, Bro, C. C. Smith, is now; evangelizing in Southern California. If you should see him you will find him one [of] the finest Christian