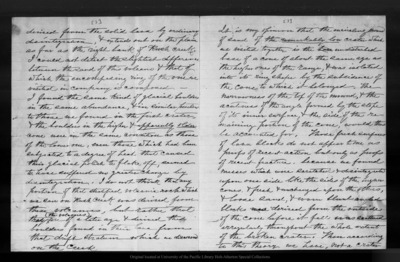 [2]derived from the solid lava by ordinary disintegration, & extends out on the plain as far as the right bank of Rush Creek. I could not detect the slightest difference between the sand of this volcano & that of which the encompassing ring of the one we visited in company is composed - I found the same kind of glacial boulders in the same abundance, & in similar positions to those we found in the first crater, & the boulders in the higher & apparently older cone were in the same condition as those of the lower one, even those which had been subjected to a degree of heat that caused their glacial polish to flake off, seemed to have suffered no greater change by disintegration. I do not think that any portion of that stratified volcanic rock which we saw on Rush Creek was derived from these volcanoes, but rather that they (the volcanoes) are of a later age & derived the boulders found in their lava from that drift stratum which we discovered on the creek[3]It is my opinion that the encircling [ground?] of sand of the remarkably low crater which we visited together is the [base deleted] undisturbed base of a cone of about the same age as the higher ones of the range, & was isolated into its ring shape by the subsidence of the cone to which it belonged. The narrowness of the top of the mound, & the acutness of the angle formed by the slope of its inner surface, & the side of the re- maining portion of the cone, would thus be accounted for. Those fresh surfaces of lava blocks do not appear to me as proofs of recent action but only as proofs of recent fracture, because we found masses which were scratched & disintegrated upon one side like the sides of the higher cones, & fresh & unchanged upon the others, & loose sand, & worn blunt angled blocks [were deleted] derived from the outside of the cone before it fell was scattered irregularly throughout the whole extent of the broken crater. Then according to this theory we have not a crater